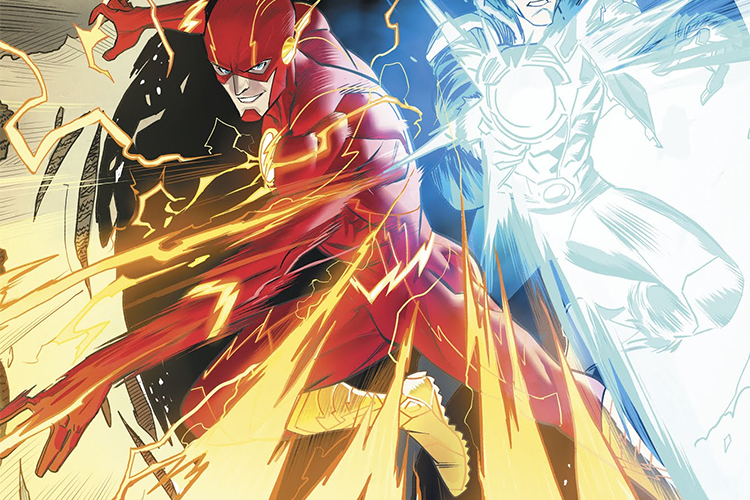 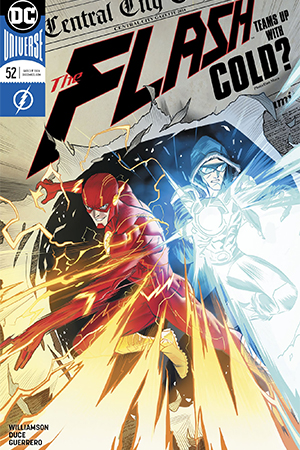 The Flash #52 continues the search for the other Forces set free by the Source Wall, although it turns out one of them might be just under Barry’s nose. He’s aided by Commander Cold, though their partnership lacks trusts and leads to more than a few misunderstandings. Barry missing Wally and Wallace, as he regrets everyone’s actions during Flash War, certainly doesn’t make things any easier. But having Iris and her sage advice does help, even if he doesn’t quite know the extent of everything she’s remembered about their past together.

The issue opens at the House of Heroes, where Barry has gathered every Flash imaginable in a fun sequence meant to figure out what’s wrong with the Speed Force and just what these other Forces are. While it doesn’t lead to any concrete answers, it’s still a strong first scene that reminds both Barry and the readers that his Earth isn’t the only one affected and his way of dealing with his powers isn’t the only option available. Plus, it’s a nice sneak peek at how artist Christian Duce designs characters as iconic as Johnny Quick or as obscure as Accelerated Man. In fact, it’s actually Fastback the turtle who suggests Barry go on a Force Quest, which is a great idea considering he’s been somewhat arrogant about the Speed Force belonging to him up to now.

But any kind of vision quest is put on hold for now, because The Flash #52 quickly deviates into the meat of the story. The young Trickster, Axel Walker, is being questioned by the police about Warden Wolfe’s abusive behavior in an interesting callback to previous plot lines. It’s nice to see Williamson tackle a very real issue within the prison system and handling it with care, even if there isn’t time for the nuances of race and class that would be relevant in the real world. Trickster’s situation is also how Commander Cold comes into the picture, as both he and Flash try to intercept when so-called “Para Angels” abscond with Axel in the middle of questioning. 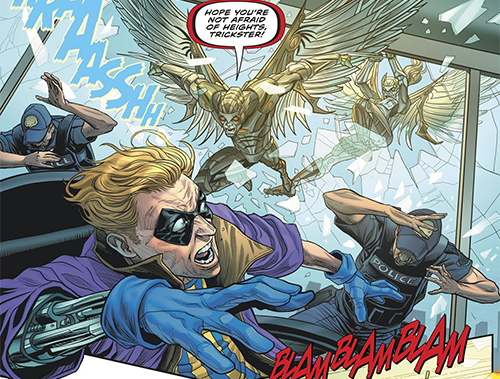 As you can see, the art team has a lot of fun with this diversion. Duce’s characters are all intricately drawn, creating more realism for The Flash #52 than the run has seen in a while but still maintaining the sense of momentum that is its signature. Luis Guerrero brightens up every panel with colors that spring off the page easily and overall make the comic feel larger than life. The lettering from Steve Wands also deserves a mention, as new characters and powers mean new sounds that make their entrance with pizzazz. The great thing about this art style is that it is all-purpose, serving the frothy action sequences between Barry and Commander Cold as well as it does the quieter moments at home with Iris.

If there’s a quibble with the story itself, it’s that I’m still not sold on all the various Forces and what their purpose in the narrative is aside from a new way to create metahumans. It’s especially strange when the Flashes of the multiverse collectively agree that they’ve never heard of anything other than Speed. Why is it only this Earth and timeline that’s affected, and is it dictated by the No Justice event or is it an organic part of the plot? Questions like that take me out of an otherwise enjoyable issue with a lot to offer. But Axel’s fate means that readers will get more answers about one of the Forces, at the very least, so I’m sure the new status quo will begin to feel more natural then.

Speaking of questions that need to be answered, the disjointed memories from before Flashpoint have been swirling around DC’s heroes ever since Rebirth started – and The Flash has been the hero most affected. Now that Wally’s memories are fully integrated and he had the chance to reunite with Iris, it makes perfect sense that she’s been affected as well. I’m very much looking forward to what this will mean for her relationship with Barry, as well as for the DC Universe at large. What changes and what stays the same? And when will Bart Allen make his way back to his grandparents? 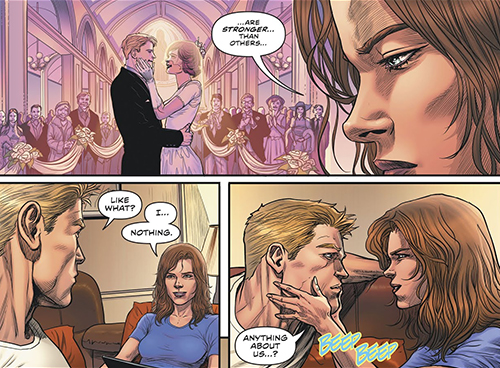 Verdict: 3.5 out 5 stars. There’s a solid new mystery and an interesting team-up in The Flash #52, as well as some aesthetically pleasing art that’s sure to keep readers entertained. It’s just that the larger plot points at work still need some fine-tuning while we wait for certain events to kick in.