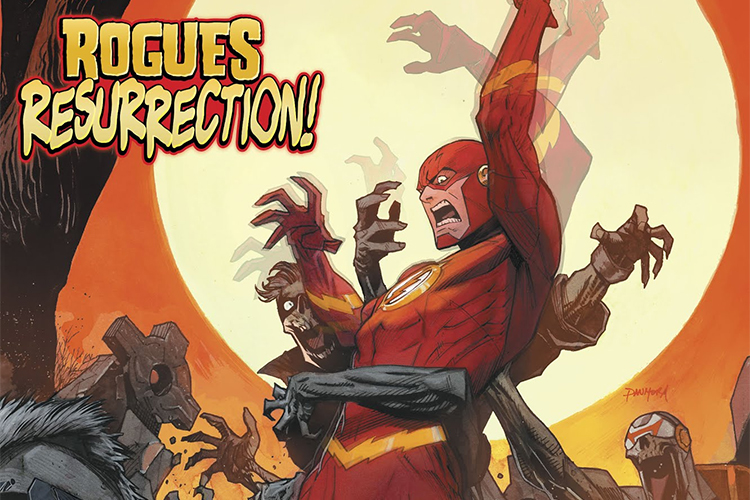 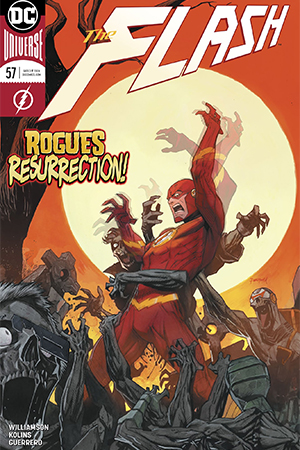 The latest Rogues arc ends with a bang – or a fire rather – as Barry and Detective Burns face off against Heatwave and the Sage Force in The Flash #57. While they try to reason with him in his mind, Iris and Commander Cold are busy trying to stave off the incoming nuclear explosion in the outside world. Both sides of the battle are intriguing in their own right, with one exploring the hidden depths of Heatwave’s childhood trauma while the other touches on the memories Iris is slowly and inexplicably recovering. Learning that Iris actually studied the new forces in a ‘past life’ adds a new layer of complexity to the story, and helps to legitimize a plot point that I previously thought was tacked on.

Aside from inspiring pity for Heatwave, The Flash #57 also presents his predicament in a visually compelling way. Scott Kolins does some of his best work in the run thus far in this mindscape, finding new ways to express forces other than the Speed Force, and Luis Guerrero’s coloring enriches every panel without fail. Together they achieve an impressive balance, making Barry and Burns look insignificant against a terrifying backdrop without diminishing the emotions that either the heroes or villains feel. 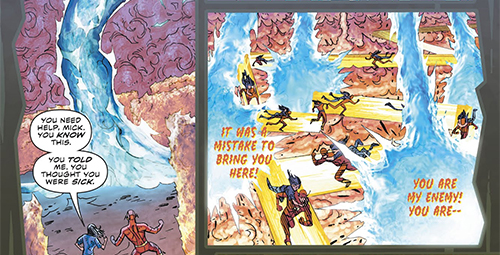 Things take a turn for the emotional when Commander Cold steps into the Sage Force space from the outside world, and there is a beautiful heart to heart between Mick and “Len” thanks to a mind-patch device that Iris remembered from her previous life’s interactions with the various forces. It’s a cool and surprising way to tie the overarching Rebirth story with the new element that’s been introduced to the DC multiverse. Although at first it’s confusing that this Cold knows what Captain Cold went through with his partner, but a later quip confirms my suspicion that their relationship was recorded in the annals of history at the Flash Museum.

But saving Heatwave’s soul doesn’t quite defeat the Safe Force, and readers are treated to another explosive set of panels courtesy of Kolins and Guerrero in the final showdown. Furthermore, Joshua Williamson takes this time to investigate the many criticisms against Barry Allen in the last few arcs and exemplify how he’s grown as a character and what lessons he’s learned. Literally running in circles to confirm that he knows that’s been his metaphorical setting since before Flash War may seem humorous in theory, but it works really well on the page.

Another thing that works really well is the burgeoning trust between The Flash and Commander Cold, which is a huge step forward when compared to his relationships with various other Rogues. It feels more than earned after these last several issues, and they part ways amicably enough that another visit to the future for a team up with the Renegades could certainly be in order one of these days. 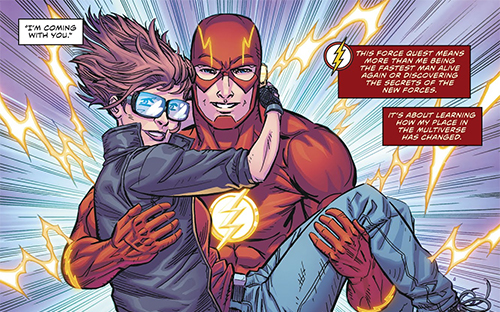 But the real forward movement in The Flash #57 comes from Barry’s final conversation with Iris, and the surprising decision they make together.  While I quibble with the editorial decision – or oversight? – to ignore what’s been happening to Wally over on Heroes in Crisis, it’s great to see Barry acknowledge that he’s been directionless ever since he lost both Wallys. It’s even more satisfying for Iris to explain her unstable connection to the past, and for the couple to decide they’re going to seek the future together. Iris declaring that she’s coming with Barry on his Force Quest was a moment to cheer out loud, especially when compared to certain other superhero couples whose authors think must be separated in order to have their own arcs – not naming any names, but you know who you are.

Verdict: 4.5 out 5 stars. The final chapter in the Sage Force story provides a strong conclusion, and The Flash #57 takes it one step further by opening up an exciting new door when it comes to the other Forces. Considering how shakily the introduction of these new elements was, it’s great to see Williamson on more solid ground and leading Barry Allen in a bold new direction.