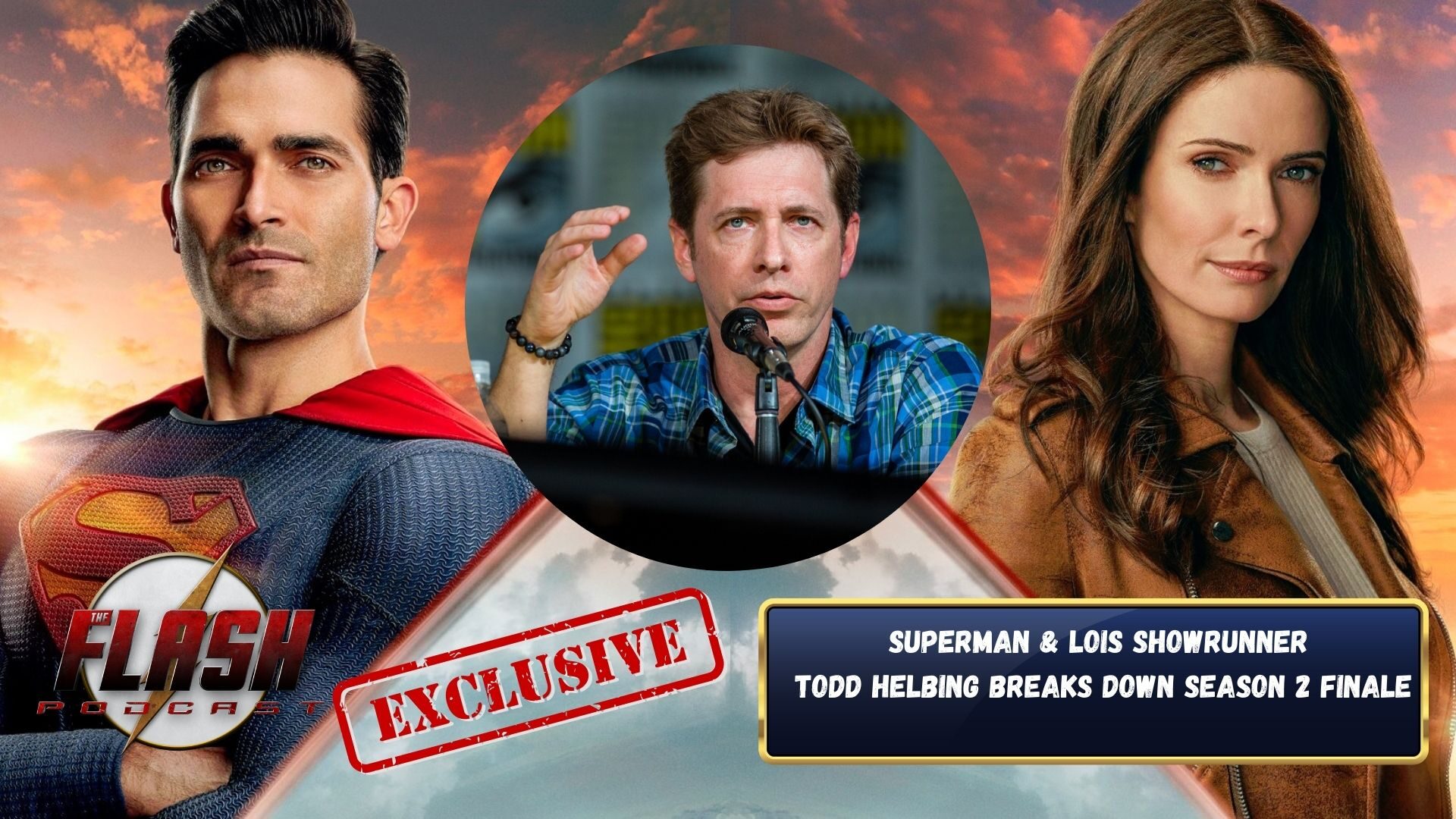 The Superman & Lois season 2 finale has just finished and some pretty big reveals came with it, including the status of the show’s place in the Arrowverse. The Flash Podcast recently had the chance to chat with Superman & Lois showrunner Todd Helbing about the massive season finale, the big Arrowverse twist, and what fans can look forward to in season 3.

The Flash Podcast: So I was surprised that both Allys survived the finale; I am guessing this isn’t the last we have seen of them?

Todd Helbing: I think we deliberately kept them around. I don’t want to get into [specifics] only because it’s a potential [story] and it’s not necessarily what we’re going to do. But there’s a lot of ideas about how to fold the Parasite Twins into the future.

The Flash Podcast: So Tal ended up on the other Earth, is this the end of him or is there a plan to get him back?

Todd Helbing: He clearly is on the trail of who his wife might be and I think he’s gonna be sorely disappointed when he gets over there and gets all the information. But it’s going to put him in a in quite a pickle. We love the Thor-and-Loki dynamic between the two of them. But I say this, we love Adam Rayner and he’s such a great guy. So we want him to continue to show up in our show and we’ll do everything we can to make sure that happens.

The Flash Podcast: We get the introduction of Bruno and Intergang, are we looking at the big bads for season 3 or what can you say about that?

Todd Helbing: We literally finished the visual effects on the last handful of shots yesterday morning. So we haven’t talked too much in earnest about season 3 yet, but I think there will probably more than just Bruno. But it’s going to be the same thing that we do where he’ll appear to be a villain for one character but it’ll tie in to Superman and Lois Lane and at the end, they all sort of come together. The stuff that we have talked about I think is is really cool and unpacks with, John Henry Nat, Lois Clark, and kind of everybody in a really cool way. So I wish I had more info for you.

The Flash Podcast: How does the new Fortress of Solitude play into season 3?

Todd Helbing: Obviously, Clark has been spending a lot of time at the Fortress with Jordan. As a parent, you have kids that need attention at different times. Sometimes you have to ping pong back and forth. With Jordan getting powers and the issues that he had and working through all that, I just felt like Clark needed to be a dad to Jordan quite a bit and there were references that got removed in season 1 about Jonathan going to the floor. But it just never felt like it played honestly that he had been there. So it’s the conscious decision to sort of bold Jonathan into this sort of superhero life and really have a presence in the Fortress, which is such an iconic part of the Superman mythology. So we just wanted to have that run through all of our characters.

The Flash Podcast: So we get the big confirmation that Superman & Lois takes place on another Earth, and I know a lot of Arrowverse fans will have questions about this so can you talk about what led to this decision?

Todd Helbing: Originally, if you look at the original script – I think it’s online somewhere – there are a lot of references to Crisis, with Clark and his family because of it. We went from having one infant to two teenage boys, that was a huge part of it. But it’s just felt like, it was opening a can of worms and and required so much explanation to, someone like, let’s say my mom, a new audience member, that it wasn’t going to play in the way that we originally intended. So Greg [Berlanti,] and I, along with The CW, Warner Bros. and DC, we just started to pull all those references out. There even was in episode two, there was a picture of Kara with the two of them at the barn from the crossovers. They just slowly for whatever reason got pulled out.

Then I had a conversation with DC, in season 1 about this, there was a desire to put our own stamp on the Superman mythology and just have it be able to function on its own. But the more we got through season 1 and the end of the season 2, it’s just felt more honest to not have it be on the same planet. I think when all the other shows were on at the same time, it was easier to do references like The Flash in Central City and Supergirl in National City. But for our show, like our big bads became so huge, and there’s no way like, having two worlds merging, but everybody won’t be there. Unfortunately, now that these other shows are no longer going to be on the air, it just didn’t feel like it was gonna be rewarding. I’m sure there’s gonna be some fans out there that are upset. I totally understand, but I think the decision was just made to keep our show on a different planet and do the best we can.

The Flash Podcast: Do you have an idea in your head canon what this world’s Supergirl is like? Whether she would be played by Melissa Benoist or someone else – although we would obviously love to see Melissa, – do you sort of know what and where she would be in this world?

Todd Helbing: Yeah, it would not be the Supergirl from the Arrowverse, it would be our version so we would invent a new backstory for her. The same way that we did with with Lucy, General Lane, and John Diggle, they may be their doppelganger and they may look exactly the same. But it would be a completely different story.

The Flash Podcast: Despite this reveal, fans always hope for a crossover between Superman and The Flash, especially before the latter ends its run, what can you speak about that?

Todd Helbing: The pandemic sort of like just made it virtually impossible of doing that. But like I say this all time I love Grant Gustin. Clearly, I’m connected to all the cast there and Eric Wallace is a friend of mine. So that would be a lot of fun. So it’s just sort of depends on if there is a real desire from everybody to do it, But those conversations are initiated by people a lot higher than me, so we’ll see what happens. I’m certainly would not be opposed to have The Flash on our show.

The Flash Podcast: So where are you at right now with season 3?

Todd Helbing: Yesterday was completing the last handful of visual effects shots for the finale. So we’re all on on hiatus for a little bit and then in July we’ll start talking about it. There’s always initial ideas that gets kicked around throughout the season and we have some Clark and Lois stuff that I think could be really cool, but we haven’t really dived into it yet and won’t for a few weeks.

The Flash Podcast: Can you talk about Chrissy finding out Clark’s secret?

Todd Helbing: We wanted to get Clark to work at the Gazette, because of Bizarro and How the story unfolded, we weren’t able to do that. But one of the thoughts is to really get Clark working on the Gazette with Lois and Chrissy. It just felt like we wouldn’t be able to do that unless Chrissy was part of the secret. It’s not like he can work at the Gazette with two other people there and constantly banish. Like you could have that at the Daily Planet and get away with it. But the bigger thing was Chrissy is one of Lois’ closest friends and to not bring her into the fold [didn’t feel right]

The Flash Podcast: Can you expand more on Diggle’s mythology on this Earth, now that we know that David Ramsey is playing a doppelganger?

Todd Helbing: This is the doppelganger of John Diggle, he’s one of the many doppelgangers that exist. There are similar things that happened because I couldn’t reveal what we’re planning in season 1,. So when Lois and Clark talk about they know about the Multiverse, we were very careful the wording and then when Diggle shows up in season 1, he’s a doppelganger, who at some point got presented this box in probably a very similar fashion. There was an Oliver Queen that he worked with. There are probably a few other superheroes that he worked with, but none of them had powers. So it wasn’t an Oliver Queen that died on that Earth, but Superman was the first powered superhero to show up. So what Diggle was referencing is there were other people there, but there was nobody like Superman. He’s the greatest. He’s the best. He’s the only one who could fly. He’s the best of all time. So that’s sort of the canon that we’re working with.