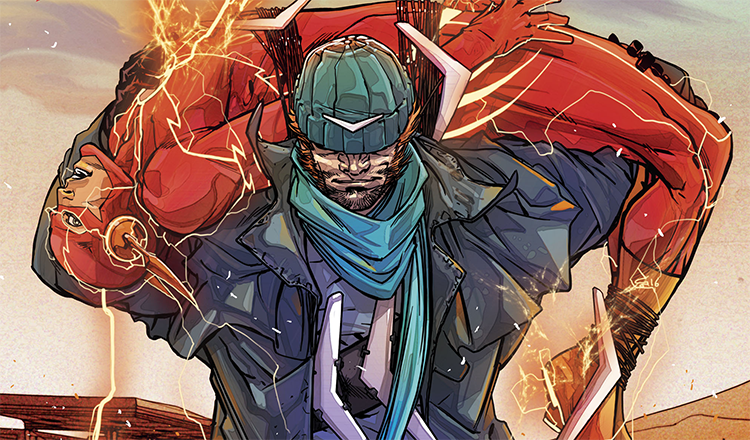 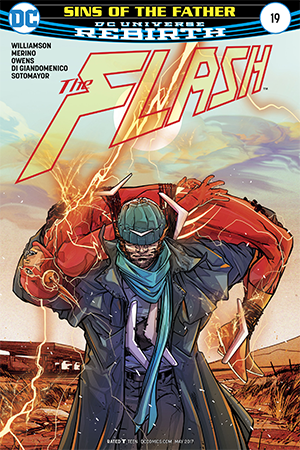 The Flash and his trusty sidekick Kid Flash start issue #19 trapped by the Weaver’s webs alongside Captain Boomerang in the Australian outback. This predicament is certainly not helped by Boomerang’s attempts at negotiation, which lead to him and The Flash in a race for their lives – not to mention Wally being held hostage as the bait.

While the trap set by the Weavers is more of a distraction from the plot than the story itself, it makes for some excellent action panels. Carmine Di Giandomenico’s style is most evident in how he utilizes The Flash‘s signature lightning, and this issue gives him new and exciting ways to incorporate it. The Weavers and their guns also provide new opportunities for letterer Steve Wands, who manages to really make it feel like bullets are flying all around Barry and Digger.

Wally will not stand for his mentor endangering himself alone, though, and manages to slip out of the restraints by turning his own weakness (inability to vibrate without causing an explosion) into a strength. Meanwhile, Captain Boomerang also shows off his cleverness, betting on The Flash even if he doesn’t like the man all that much. It’s a lot of fun to to give Barry a break every once in awhile and allow others to save the day in unlikely ways. Wally getting hold of a boomerang is a brilliant move on Joshua Williamson’s part, and the art on that page really stands out. Not only that, but Wally is also allowed to be his young, carefree and cocky self for a few moments. In an arc as emotionally heavy for him as this one is, it doesn’t hurt to see him having a little fun with The Flash.

The fun can’t exactly last, though. Nor should it when there’s an actual story to be told, and halfway through The Flash #19 the conversation turns back to Daniel West. In a rare moment of deeper feeling for Digger, he listens to a son’s heartfelt plea and decides to come clean about the father’s whereabouts. Recalling the event’s of 2014’s New Suicide Squad Annual #1, he explains how Daniel died because he refused to let a group of kids die instead. It’s a touching moment that provides some closure for both Wally and the readers, despite the story having actually taken place years ago.

The events that follow are more heartbreaking than heartwarming, but The Flash does a stellar job of laying Wally’s soul bare this week and digging deeply into his fears and insecurities. And while Barry’s gamble to be honest with Wally in return may not have paid off in the short-term, there’s a clear feeling that things can only get better from here. Especially if The Flash takes his protege’s advice and lets a certain significant other in on the secret as well…

Verdict: 4 out 5 stars. The final page reveal is a whopper of an ending – only slightly undercut by the constant promotion of the upcoming Flash/Batman crossover all month – but the issue can’t be judged solely on that. Even though “Sins of the Father” didn’t advance a larger plot, it was an extremely important and emotional look at Wally’s view of his home life. Not only that, it further touched wonderfully on the themes of family as blood versus family as you make it, which is one of the reasons The Flash is such an enduring tale of heroism.