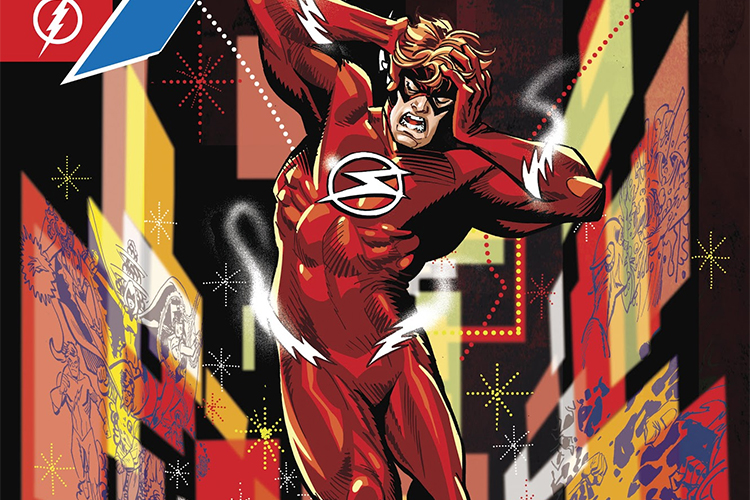 REVIEW: The Flash #46 – Down Memory Lane 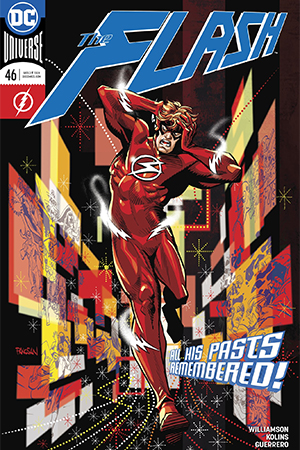 The Flash #46 juxtaposes two parallel yet opposite partnerships with the upcoming Flash War serving as a foreboding backdrop. Many fans have been questioning how Barry and Wally could be at such odds in the near future, but their two most iconic enemies team up to tear them apart makes the highly publicized arc much easier to understand. Not to mention that opening the issue with Zolomon’s inner monologue and the genesis of his plans with Thawne establishes a precedent for the intermingling of timelines and histories that encompasses Wally’s recovered memories, especially when one compares the disappointments Zolomon claims to have suffered with the losses Wally is just now learning he’s endured. 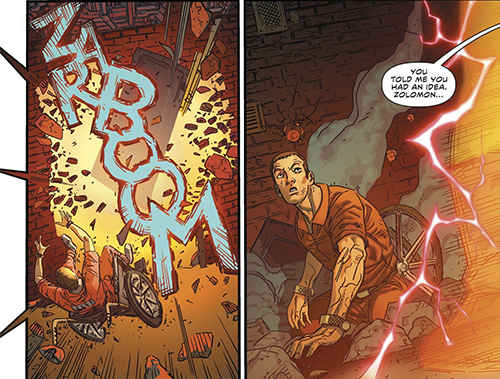 Given that Scott Kolins was the artist that first drew Zolomon’s classic stories, it’s fitting that he returns in The Flash #46 to recount his rebirth. While the character designs are not my personal preference, there is no doubt that he captures the emotional range of the proceedings and the kinetic energy of the speed force. Luis Guerrero once again does excellent work with the colors, matching Kolins’ vigor in every panel. Together they create a cohesive visual palette for the confusing and disorienting realities that Wally is experiencing.

Due to his current crisis, Wally is acting out in ways that are very unlike him. It’s not as dramatic a shift as Barry under Grodd’s influence, but it does cause him to question whether reuniting is worth it as well as to lash out at Barry and reject further testing. And he’s not the only one going through an emotional upheaval, as Barry works his way through the expert opinions of Zatanna, Martian Manhunter and the Green Lanterns trying to find out what’s wrong with his nephew to no avail. He then stops by Batman’s cave to have a bit of a breakdown and a touching scene about parenthood with Alfred. Even without Bruce present, the parallel between his adventures in metaphorical (and now literal) fatherhood and Barry’s own are quite cleverly drawn. 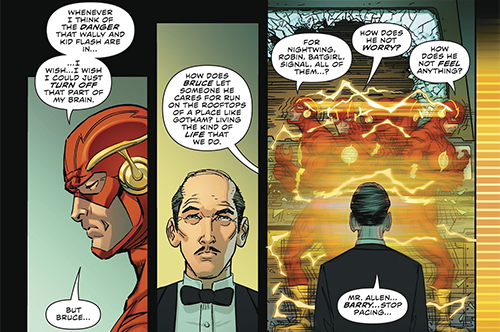 Speaking of clever, Williamson uses Wally’s fractured memories to incorporate several nice touches to both the originating story of Rebirth – which we still haven’t gotten all the necessary answers to – and several of the previous events and timelines that are no longer with us. For example, Wally momentarily sees Victor in Cyborg’s golden suit without any context for which to explain it. It is these conflicting visions that take him to the Flash Museum, and perhaps to the most heartbreaking scene in all of The Flash #46. Through Hunter’s monologue, we learn that Wally visited there often to draw inspiration from his mentor, while at the same time we come face to face with the vast differences between Wally’s mind at the moment and the reality surrounding him.

But while the final pages of The Flash #46 turn the villainous Thawne-Zolomon duo into a single by showing us the prelude to The Button arc, they also reinforce the strength of Wally and Barry’s partnership with a more lighthearted run. Nor is the importance of the larger Flash family forgotten; it’s reflected even in small moments when Barry is sure to include both older Wally and Kid Flash in his list of parental worries. Of course, the very powerful bond they’ve forged is only going to make Flash War that much more painful – entirely by design.

Verdict: 4 out 5 stars. Williamson does a great job of intensifying the emotional investment on all sides of the equation in The Flash #46. Wally’s inner turmoil and Barry’s worry are understandable and crystal clear, while Zolomon is shaping up to be as big of a threat as ever. In addition to a sturdy framework in which to tell the Flash War story, the return of Scott Kolins’ art is sure to appeal to longtime fans and set the scene for another classic Flash family tale.