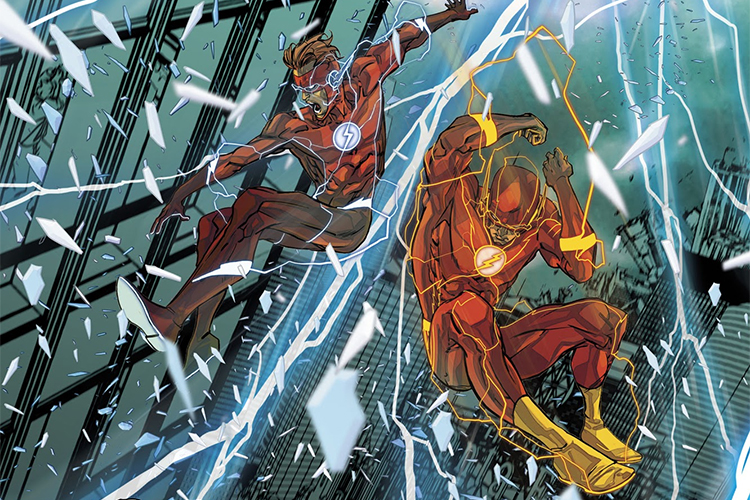 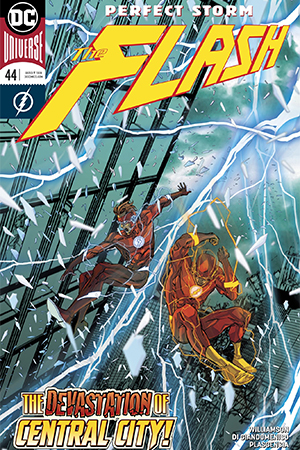 “The Last True Burning Letter” before deciding against it, since I fear the reference would be lost on many readers. But The Flash #44 absolutely made me feel like a lyrics in an early-2000s Something Corporate song, and I mean that in the best way possible. It not only raised the stakes as the finale to the “Perfect Storm” arc, it also offered a redemption for Barry’s recent blockheaded behavior and managed to be the most enjoyable single issue of the bunch. And most effectively, it tied the story together with a beautiful letter from Barry to Iris – written when he expects to die in the Negative Speed Force storm – serving as the framing device. Given how little time has been spent on Iris since her breakup with Barry back in The Flash #27, it’s surprising that this narrative choice works as well as it does. Then again, it’s a compelling full circle from Barry’s attempts to make amends minutes before Grodd attacked, and his confessions have over half a century of comic book history standing behind them. 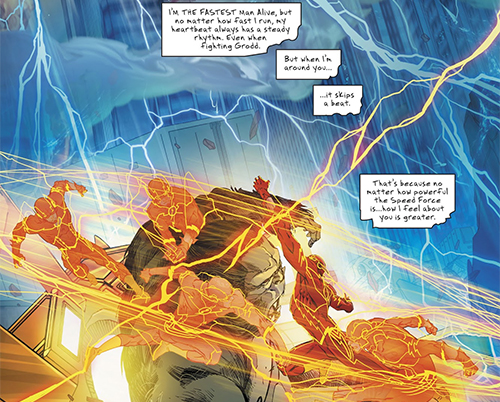 There’s more to The Flash #44 than sweeping romance, though, and Williamson comes up with a pretty brilliant way for Barry to get out of Grodd’s grasp even as Central City comes apart around them.  Carmine Di Giandomenico and Ivan Plascencia are given ample opportunity to do their best work here, and they certainly rise to the occasion with beautiful yet frightening images of the Speed Force storm interspersed with all the individual battles the Flash Family is currently fighting. Steve Wands’ lettering is also used to great effect, especially when panels of the older Wally rescuing Iris while still refusing to reveal himself to her are juxtaposed with the sickening “krak” of Grodd pummeling what he believes to be Barry. Thankfully it’s not Barry, because he actually reversed his psychic connection with Grodd to make the gorilla see what he wanted instead of Barry himself seeing what he feared. It’s up to you whether this plot point tracks, and I personally must admit that I’m ignoring how rushed it felt in favor of how satisfying it was. I prefer to be surprised, so I can overlook a lot of the incredulity.

It is also perhaps a little too convenient that the Gorilla City Guard are finally able to break through and arrest Grodd once the lightning rod tower fell, but the meat of the Flash Family story that follows more than makes up for the weaker elements of the Grodd one. With the gorillas gone and everyone evacuated, it seems there’s nothing left to do but watch as Central City is consumed by the raging storm. That is, until August and Meena inform the others that the storm will spread across the entire world unless someone stops it – at the cost of potentially their powers and their life. This time, it’s no surprise that Barry steps up and decides to sacrifice himself. Such a display clearly acknowledges how differently he views his powers after the latest arc, while still acknowledging that he has a lot to learn in terms of what family means. Of course, Wally isn’t going to let his mentor run himself into oblivion alone, and soon enough every member of the current Flash Family joins forces to stop the storm together. 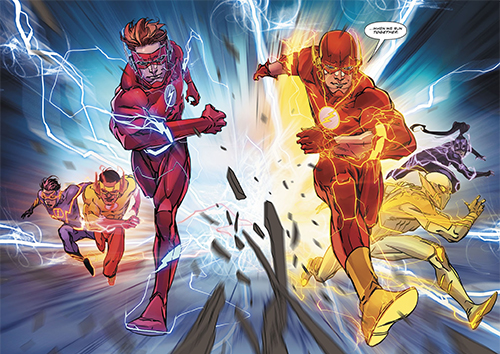 Once again, the artwork is stellar, proving that Di Giandomenico and Plascencia are the perfect team for this run. But more than that, these few pages establish the speedster lineage – which hasn’t really been seen since Flashpoint – as thriving once more. It’s even better when the teamwork here coincides with the letter’s revelation that Iris has two nephews named Wally, and it’s time for her to meet the second. Even though she doesn’t actually receive said letter in The Flash #44, all the pieces are set up for the Flash Family to be back on track once more. And while Barry running home to Iris after saving the day with his team would be the perfect ending, Williamson gives us a taste of what’s to come while also reminding us of the enduring legacy of The Flash. Barry’s as-yet unread letter to Iris is immortalized beside a statue of the couple, which Hunter Zolomon can’t wait to topple.

Verdict: 4 out 5 stars. The resolution to Barry’s fight with Grodd may be a little abrupt, but The Flash #44 gives us back the speedster we know and the teamwork we love. It paves the war for an epic story in Flash War, and also carves out a space for Iris West as the matriarch of the Flash Family once more.