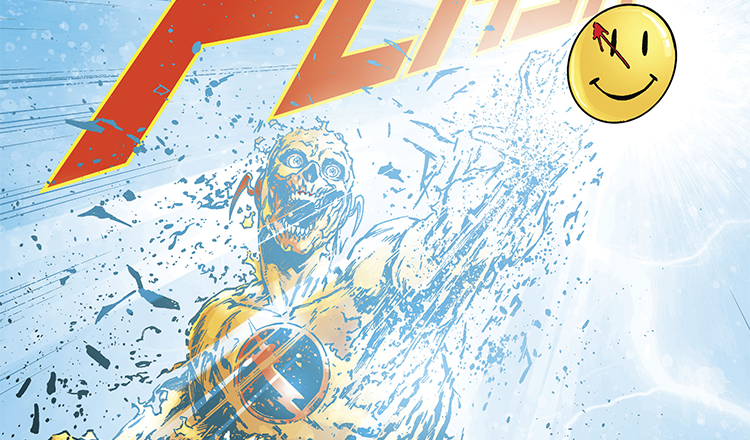 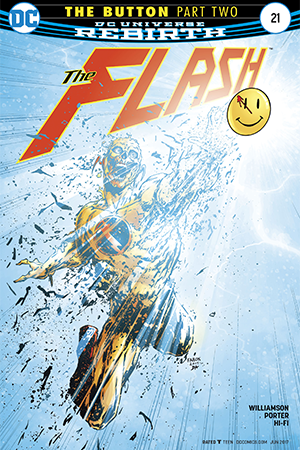 The Flash #21 continues the crossover storyline that began in last week’s Batman #21, where Batman was attacked by the Reverse Flash in his cave as he looked over the mysterious Button. Once Eobard himself picked up the Button, he claimed to have seen God. Barry eventually arrived to find a beaten Bruce and a Reverse Flash reduced to bone and ash.

While the previous Batman issue opened with Saturn Girl watching helplessly as a future no one believes she can see unfolds, this one starts with Johnny Thunder trying to summon the Thunderbolt with the magic words cei–u. But the story quickly shifts back to Barry Allen piecing the crime scene back together like the talented CSI he is. 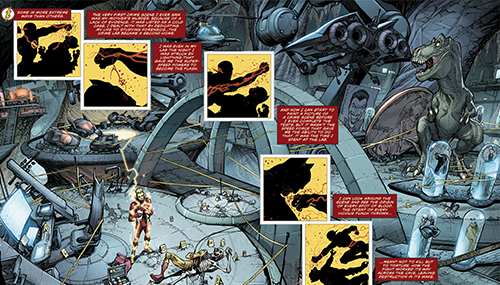 Barry takes a moment to soak in Thawne’s apparent death –  ‘apparent’ because it’s hard to believe The Flash would kill off one of its iconic villains in a single scene at the start of such an important arc – but he knows justice has not been served. In the course of this investigation, Joshua Williamson takes full advantage of Bruce and Barry’s shared affinity for evidence. The Flash unites his scientific knowledge, which proved that Thawne was covered in Barry’s speed force signature when he died, with Batman’s keen observational skills. And, of course, this provides an excellent out-of-universe reason for Williamson to catch up readers who aren’t familiar with DC lore in a way that doesn’t feel clunky.

But even as the story expounds on the characters’ respective strengths, it also highlights their weaknesses – especially the Flash’s penchant for keeping secrets. While Batman confesses that he saw the ghost of his father when he touched the Button, Barry not only keeps his feelings to himself but also pertinent pieces of his investigation. He goes so far as to plan a trip on the Cosmis Treadmill by himself, not daring to alert either Wally or Bruce to his plans. These kinds of actions on his part are certainly frustrating, but they’re also definitely in character. Ever since Flashpoint, Barry has operated as more of a lone wolf instead of the partnership-oriented hero he once once. It’s only since Rebirth that he’s rediscovered the joys of teamwork, and sometimes he still has relapses – but thankfully Batman is smart enough to keep up with him.

Their joint trip through time is exciting enough as a plot point, but it’s really the art here that sells the moment. Howard Porter infuses each panel with the kinetic energy that is The Flash‘s signature, and the exhilarating sense of disorientation is only accentuated by Hi-Fi’s psychedelic colors. They pass through various alternate realities – or are they? – and pave the way for plenty of callbacks to comics past. The art team depicts these excellently, making clear echoes will still maintaining their unique style. Just check out this Crisis on Infinite Earths callback: 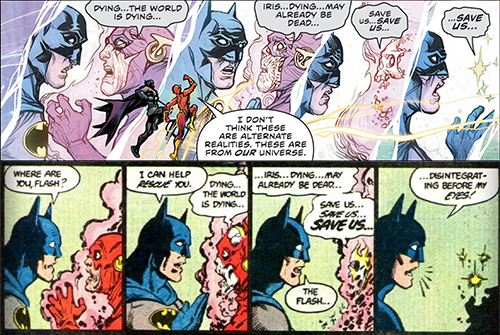 The Flash‘s current run has included several instances like this one, which are fun easter eggs for fans but also an important reminder of how the universes and timelines seem to be merging. Speaking of merging, Batman and Barry wind up in the very last place I’d expect them to at the end of this issue. Yet it makes perfect sense if the two detectives are going to uncover the mystery behind Rebirth and prepare for the battle that Wally warned them about.

Verdict: 4 out 5 stars. After a warm-up issue in Batman #21, the crossover starts digging into all the questions that have been cropping up since DC kicked off their rebooted universe – and this time it even answers some of them! Williamson has had a great grasp of Barry Allen’s characterization from the start, and in just a few pages he shows that he understands Bruce Wayne, too. Remember to check out Batman #22 next week to continue the story in chronological order.