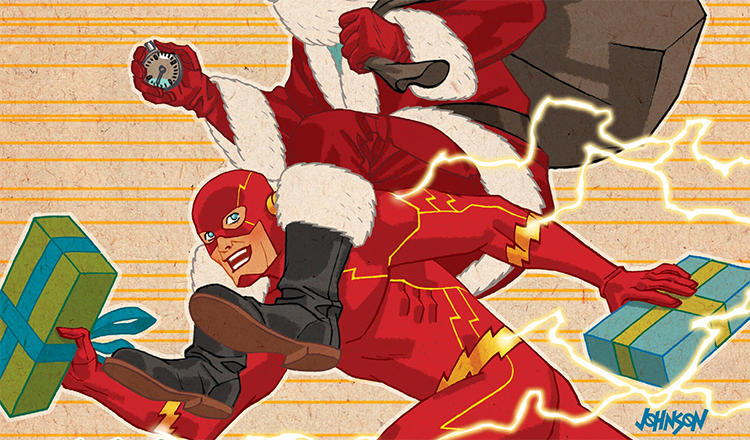 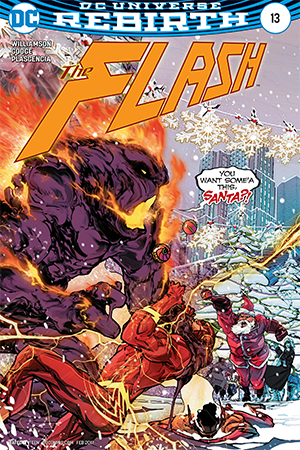 The Flash #13 is a standalone story that gamely gets into the holiday spirit, focusing more on family dynamics than the villain of the week for once. And this time even the villain gets some family dynamics to worry about! The story starts with young Wally West facing off against a machine gun-toting Santa Claus in an effort to keep the streets safe. Of course that’s something he and Flash do all the time, but tonight is different because he wants make sure his aunt Iris has no reason to call off her date with Barry Allen.

Speaking of said date, Joshua Williamson does a fine job of allowing Barry and Iris to dive into the various issues that have kept them apart – even Jessica Cruz from the pages of Justice League gets a silent shout out – and lets them each say their piece. From other relationships to bad timing to the simple fear of change that leads to self-sabotage, the two of them tackle their anxieties in a way that feels like a believable couple. 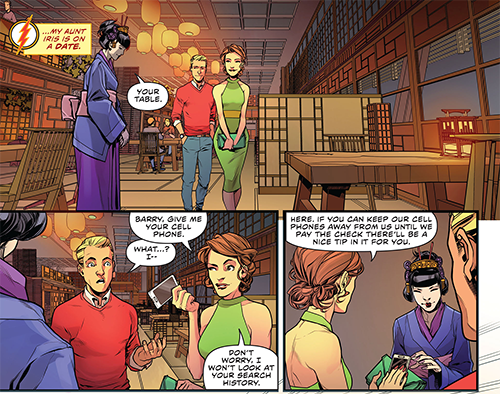 Barry and Iris have some adorable laugh-out-loud moments, but Wally is the heart of the issue. His kind and generous nature shines throughout as he tries to play matchmaker for his aunt despite his somewhat justified misgivings about Barry. It’s only magnified by his visit to a soup kitchen and, more importantly, his dealings with Tar Pit.

If I’m not mistaken, the last time Tar Pit showed up in any major capacity was Blackest Night, so it was a fun treat to see him reemerge. Especially given the humanizing context the story gave him, much like Shade in the previous arc. Once again, the villain was more than he appeared and his story paralleled the hero’s. Last time it was Barry who was trapped in his own past, much like Shade, but this time it is Wally who wants to help his family as much as Tar Pit wants to help his. 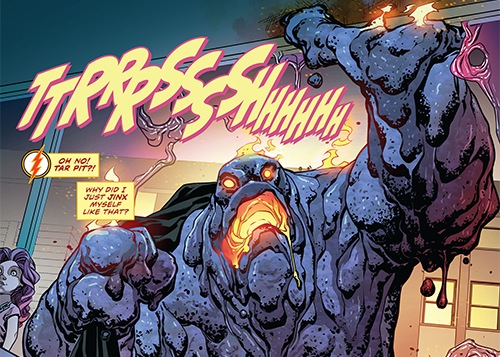 Neil Googe’s art gives the issue a more youthful appearance, except for ironically Barry himself who comes off looking a little older. But the lighthearted, almost cartoonish element in the lines is perfect for a plot narrated by Wally. Even Tar Pit comes off more pitiful than menacing, which feels appropriate for the story arc. Ivan Plascencia’s colors continue to be the glue that holds the entire Rebirth run together, making the characters pop off the page and filling every issue with a vibrant energy that Barry and Wally both embody.

The Flash ends the year on a heartwarming note for Barry, Iris and Wally… Even for Joey Monteleone and his niece and nephew. Given how dark the world can seem sometimes, and especially this year, it’s wonderful to see this series hit on that perfect note of optimism that Barry has been known for this last half-century. But amidst the hot cocoa, first dates and family fun, Williamson still manages to set up the next exciting Rogues arc for 2017. 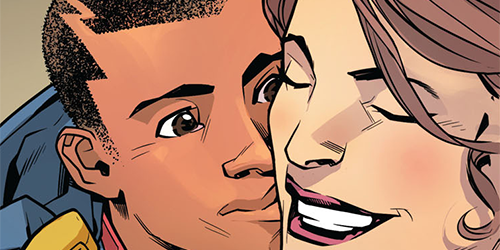 Verdict: 4 out 5 stars. Old villains and romances are reborn with a twist as Rebirth continues making Barry Allen’s story feel fresh yet familiar. Meanwhile, Wally continues to cement his place in the legacy of the Flash family.