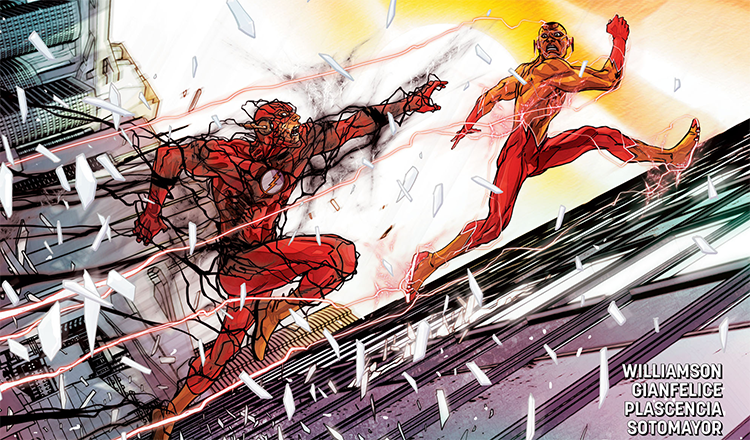 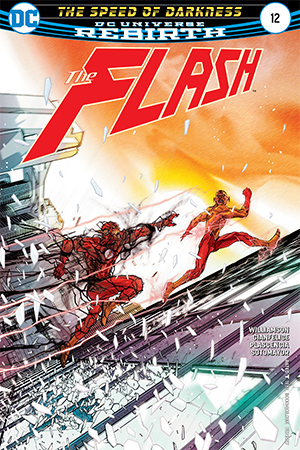 The Shadowlands conflict in this week’s Flash was resolved much more quickly than expected, but it was an enjoyable means to a wonderful end. At its core, the story of The Flash has always been a hopeful one the about importance of family – not just the one you’re born with but the one you make for yourself. Without getting too sentimental or sappy, Joshua Williamson has managed to capture that theme beautifully in his Rebirth run thus far, and especially in this latest arc.

This issue starts with a flashback to Wally’s conversation with his mentor a few days before. While it’s not particularly essential to the plot, it does serve as a great illustration of their dynamic, and blends lighthearted humor with the lingering pain of trust not being reciprocated. It also doesn’t hurt that the flashback gives the art team a chance to flex their muscles and showcase a slightly different color palette. 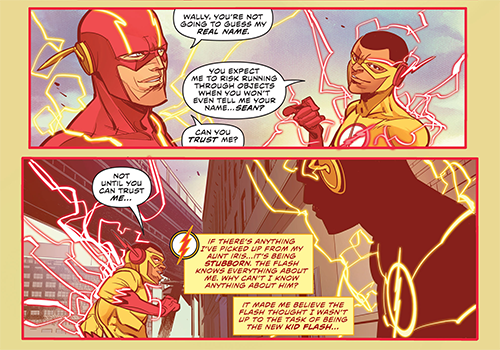 In the present, however, Wally and the Flash are trapped in the Shadowlands and Iris has been possessed by Shade’s rebellious shadows right along with Hope. This story line has excellent build-up in the previous two issues, but the climactic moments here were a little undercut by how easily a resolution presented itself. I personally loved that Iris was able to free herself from outside mind control, and their escape was another great bonding moment for Barry and Wally. The problem, which is admittedly a minor one, is that the stakes didn’t feel very high. Once the Shade was revealed to be more of a friend than a foe, it was only a matter of time until Barry and his friends figured a way out. Regardless, the strong character moments for Iris and Wally more than made up for it.

Perhaps it’s a good thing that the conflict felt lighthearted despite literally taking place in the shadows, because Godspeed was dark and tension-filled enough to merit Barry catching a break. Besides, the art in the Shadowlands seemed to further emphasize that the story wasn’t meant to be depressing. Light purples that never darken to black for too long, and almost-friendly looking ghosts allow the reader to focus more on the interplay of characters rather than the plot. If anything, the story was representative of the hope Barry has in his future, with the family that’s waiting for him if he takes the chance. And, of course, the fact that Shade’s true love is named Hope adds to that picture. 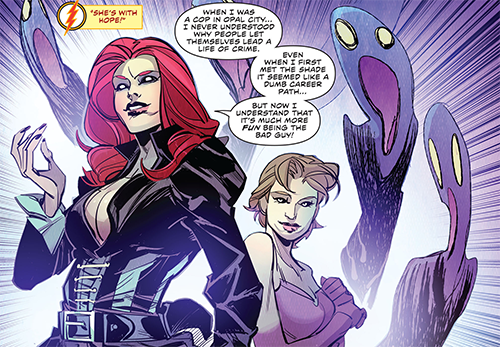 The way out of the shadows also seems to symbolically appear once Barry has had a breakthrough of his own and shared it with Wally, as well as when Iris finds it within herself to fight back against the darkness. Flash wants Wally to stay a kid even as he’s teaching him how to be a superhero, and that admission is enough to help restore the breach of trust between them. The fact that they manage to escape through a physical symbol of friendship solidifies the metaphor.

There’s a fun potential hint of the pre-Flashpoint timeline this issue, despite older Wally not being around. We’re left to wonder whether Shade’s immortality allows him to know more of the converging universes than Barry, or if he just made a simple error that haunts Barry instead. But either way, the comment clearly gets him thinking… and leads to a question that I look forward to seeing Iris answer next issue. The final scene between the two of them was a long time coming and incredibly satisfying. After such an emphasis on hope and family, it’s about time that Barry takes his own advice and lets himself be happy.

Verdict: 4 out 5 stars. Not necessarily the most in-depth exploration of the Shade or the Shadowlands, but it was an enjoyable conclusion to an arc full of important character moments and emotional developments. Wally West has been fleshed out so well now that the growth of his relationship with the Flash feels rewarding, and the parallels between Richard (The Shade) and Barry are drawn clearly enough to act as a believable impetus to push him towards Iris.