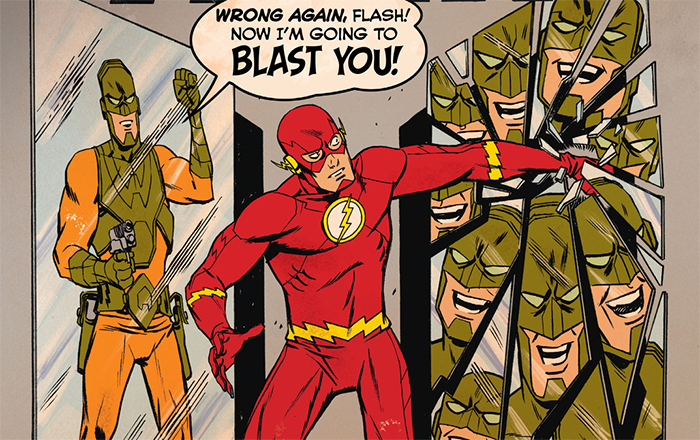 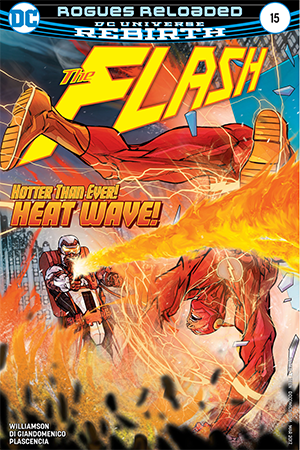 The Flash #15 takes us to Corto Maltese, where a short history lesson is being provided in Captain Cold’s icy blue narration. It seems the Rogues are pulling off another one of their classic heists as a team… Only this time, it’s far away from Central City and the Flash. Each of the Rogues shows off their special skills or gadgets, with Captain Cold and Mirror Master trading quips back and forth and harassing cops and civilians alike in their quest to steal the treasures from Corto Maltese’s museum.

That is until they’re interrupted by the appearance of the Flash himself, who tracked the Rogues down from the clues they left in their secret lair. The scene is set for another showdown between Barry and Leonard’s crew, but quick-thinking readers will recall from last issue that this was all “bait.” Corto Maltese is simply a distraction from whatever the Rogues really intend. So then, what are they all doing here? And what is their plan to trap the Flash? 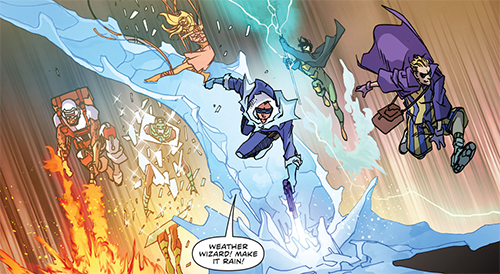 Despite knowing this battle couldn’t be the culmination of their arc, it was easy to get caught up in the banter and believe the Rogues were really facing off against the Flash outside of the city once and for all. Perhaps they believed that he’d be easier to defeat if he was cut off from the resources Central City might offer. Or perhaps they knew Kid Flash was helping him nowadays and assumed he’d be weaker as a lone speedster. Even though the variant Mirror Master cover laid out the plot to some degree, the twist still came as a surprise.

It was nice to see Barry use his detective skills a little bit, even if it’s nothing compared to when he gets story lines at CCPD. There were enough hints throughout the issue to alert readers that something was off, but Joshua Williamson didn’t beat anyone over the head with clues. Thus the opening sequence was enjoyable while setting up the still more interesting confrontation between Flash and Mirror Master.

It seems a large part of Mirror Master’s plan involves using Barry’s heroic traits against him. First, his speed is how he stops criminals, but it’s also why he sometimes misses important details. Second, his need to help others makes him our hero, but leaves his own person vulnerable. While these are both fairly common sense points, there is something refreshing about utilizing them in the story so openly.

Carmine Di Giandomenico’s art, meanwhile, is a stand out in this issue. With so many different powers and elements battling for dominance on the page, he seems to be having more fun than ever. Ivan Plascencia’s colors help the fire, ice and electricity crackle and pop without ever becoming too overwhelming. Overall, it’s really the art that makes this detour in the story memorable. His take on Mirror Master especially feels unique to his art style, but every Rogue gets their moment to shine. 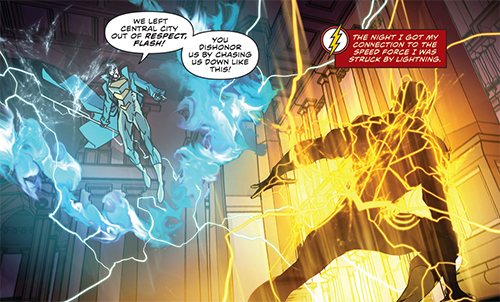 Verdict: 3 out 5 stars. Some great work by Di Giandomenico and Plascencia is buffeted by Williamson’s clever dialogue and a few interesting plot twists. However, The Flash #15 serves as further set up for a confrontation with the Rogues. Hopefully the next issue will deliver on the promise brimming under surface.