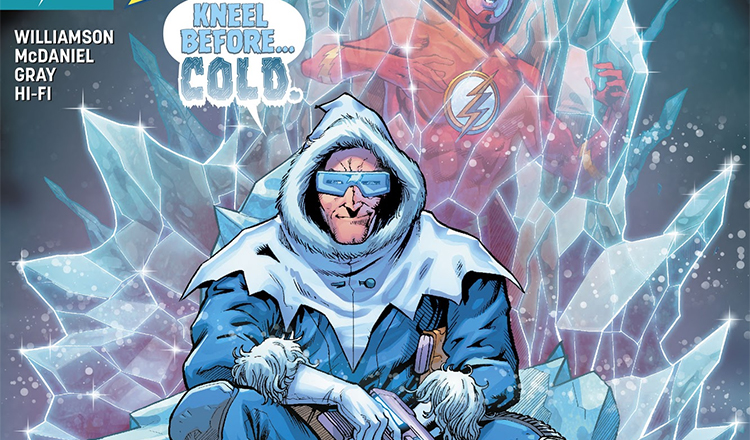 REVIEW: The Flash #37 – Kneel Before Cold 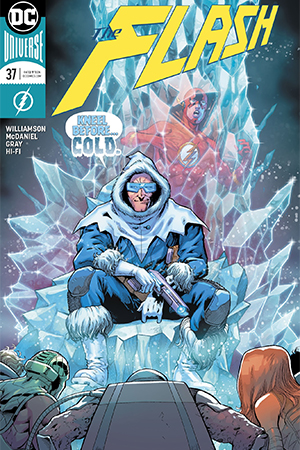 The Flash #37 opens with the Rogues admiring their work thus far, while Captain Cold savors the near completion of his wildest dreams. Will this be the day he finally pulls a fast on the Flash? With Godspeed’s help, he just might manage to pull off that feat. On the other side of Iron Heights, Barry and Kristen are hard at work trying to solve the case of Roscoe Hynes’ (AKA Turbine) murder. These two plot lines dovetail nicely with one another, joining the two sides of Barry’s life in a way that few stories have before during this run. But considering that there’s also the added element of police brutality to deal with – specifically when Barry discovers that Warden Wolfe took Trickster’s arm away – it does feel that at times Williamson in biting off more than he can chew. Nevertheless, the questioning of Trickster reveals that there’s a larger plan at stake for the Rogues, and thus it draws Barry deeper into the mystery of Turbine’s death.

The set-up for The Flash #37 is quite intriguing, and provides enough tantalizing clues to draw a reader in. At the same time, it’s also the first issue in a while with a new set of artists in McDaniel and Gray. The changes to Barry’s features especially take some getting used to, but Hi-Fi’s familiar color palette helps bridge the transition. Furthermore, there are a few great-looking set pieces that blend Williamson’s ironic touch with the new art style very well – such as the humorous moment of Captain Cold obsessing over the Flash just as his sister Lisa and her boyfriend Sam marvel at how not obsessed they are with him.

While Barry and Kristen’s tentative friendship and coworker dynamic makes for a decent side plot, it’s unclear where the story is headed. Given that Barry is the reason Kristen got transferred and yet she still believes he can change, there is certainly a theme about second chances that Barry could apply to other areas of his life. In The Flash #37, it seems like that theme comes into play when he chooses to trust a lead from August Heart despite knowing that it could lead to a trap – and he brings Wally along for the ride. Maybe one day soon he can apply said theme by talking to Iris again (just saying!).

The clue does lead into the obvious trap, but at least it also lets Barry know that Captain Cold is mass-producing his gun and once again ropes Copperhead into the story – although that’s perhaps the most confusing element of the mystery thus far. But while every reader know there would be a trap, its nature is quite surprising and certainly create a lot of anticipation for the next issue.

As previously mentioned, the new art team makes for different stylistic choices when it comes to the characters. I need a little longer to decide if I personally like the change, but there are a few standout moments where the emotions of the scene are perfectly displayed on in characters’ expressions. One such section is Axel discussing the abuses he feels he deserves, which create more sympathy for the devil than I previously thought possible. If the art is lacking in any area, it’s that the speedforce scenes no longer feel as dynamic and the lightning that signifies Kid Flash and his mentor running is less electric. But there wasn’t that much running in The Flash #37, so there will be future opportunities for that to improve.

Verdict: 3.5 out 5 stars. Good use of CSI Barry Allen and an ever-expanding mystery, though parts of it are still a little too under-explained. The art may be a little too different at first, but there are still excellently drawn moments.