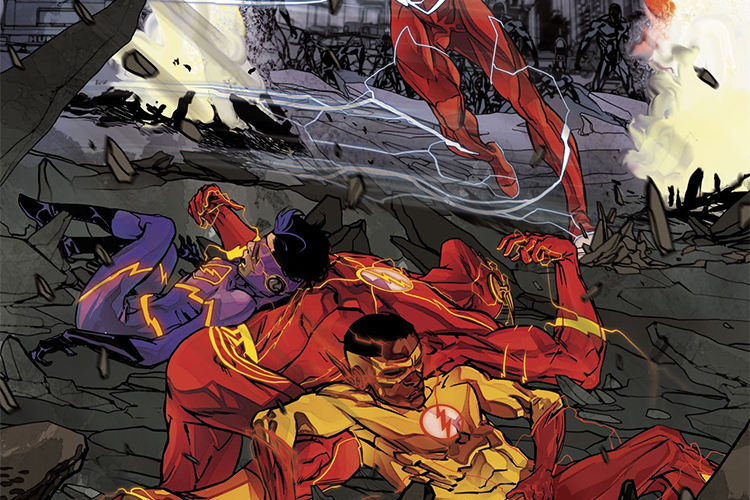 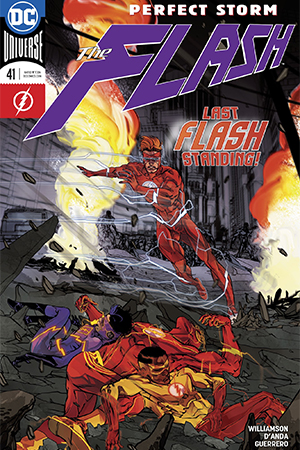 The Flash #41 opens on Grodd plotting with his minions, who inform him that the wand Multiplex needs to complete the lightning rod is missing. But Grodd, being the excellent strategist ape that he is, isn’t particularly concerned about not ensuring his desired outcome given how well he knows Barry Allen. And so we spend most of The Flash #41 watching Barry wrestle with his fate while coaching both Wallys and Avery on how to fight Grodd without him, all the while wondering if he’ll fall prey to his own insecurities. At first he remains the hopeful and inspiring man he’s always been, refusing to believe that Grodd will defeat the other Flashes, but he does start to lose his grip later on. One of the best parts of the issue is that it doesn’t just focus on Barry in light of his new circumstances, it also allows the younger Wally and Avery to contemplate what their powers mean to them once they discover that the lightning rod is slowly sucking up all the speed force – even theirs.

Another great thing – and there’s actually quite a bit considering how it first seems like filler issue – about The Flash #41? The art. Carlos D’Anda and Luis Guerrero’s first time working on this run is a success, creating a more youthful look for the characters that helps energize the story. Guerrero’s colors are a little less vivid than previous artists, but works considering that Barry and friends are literally losing their life force. And as optimistic as Barry seems at first, D’Anda makes his later uncertainty and even anger seem just as believable.

As good a job as Williamson usually does of layin the groundwork for Barry’s mental state, his turn from accepting Wally as the new Flash to grabbing for the title himself was a little too quick for my taste. Some amount of work on that front was done before The Flash #41, but given how sure of himself he seemed at the start of the issue it was a little disconcerting to see him so focused on his own powers. It almost seemed as if the wand was possessed or was otherwise exerting some sort of control over him, which is entirely possible given that Meena and Raijin have been brainwashed by Grodd as well.

Wally decides Meena’s been brainwashed as well, and his attempts to snap her out of it are a nice callback to their short-lived partnership earlier in the run. Speaking of callbacks, the most poignant sequence is probably the older Wally running through Central City while evacuating its citizens and remembering the important moments he lived there. A kind flower shop owner takes him back to his first date with Linda and a few others get joyful greetings as he deposits them to safety, but the most powerful encounter is when he comes face to face with Iris (whose hair looks so much better and whose face looks so much younger, yay!). 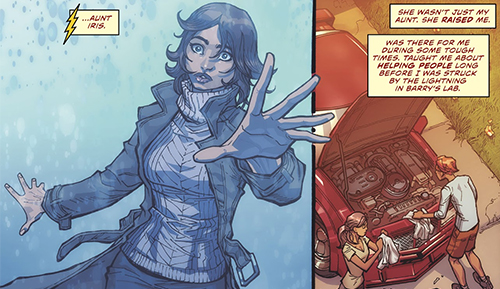 It’s always lovely to get little snippets of Iris and Wally’s life outside of Barry, but the important part is seeing how much Wally is struggling with his choice to keep her outside the loop. Of course, there’s not much time for introspection because the last few pages are when the plot gets moving. Meanwhile, Barry is creating a new problem all on his own when he breaks into Iron Heights to get help from a rather unlikely candidate. The idea that no one knew him before he had powers is a rather depressing one, but at least it makes sense as a motivator for getting them back. I’m just not sure if I believe Barry would become that desperate that quickly, though I do appreciate Wally getting the chance to shine these last few issues. Maybe he’ll be able to give his old mentor a few tips before during the upcoming Flash War arc.

Verdict: 4 out 5 stars. Refreshing and youthful art combined with a powerful story for both Wallys helps make the most of the latest Grodd arc. While Barry’s actions are disappointing, especially coming so soon after the Negative Flash arc, it’s also good that he’s being given the space to make mistakes.