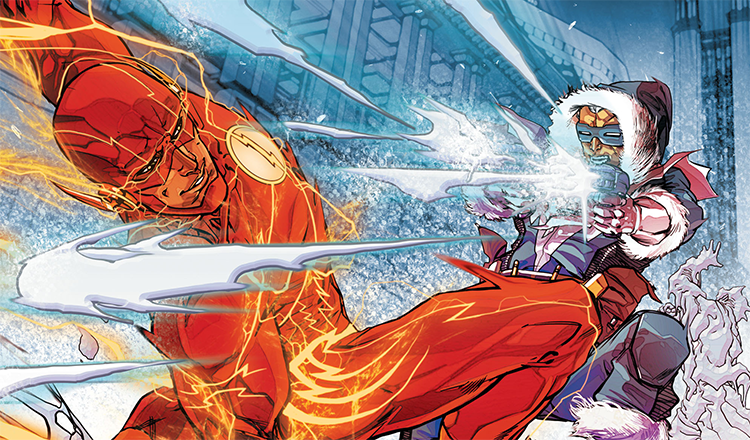 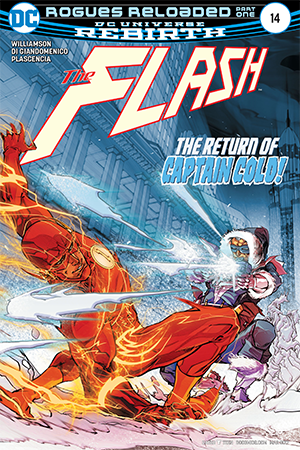 The Flash #14 opens with a sort of eulogy to the Rogues, because it seems Barry Allen has been missing his merry band of villains. After taking readers on a trip down memory lane that ends with the Rogues skipping town after the lighting storm, Barry reveals that he’s been investigating their whereabouts to no avail. On thing’s for sure, though – he hopes they come back soon because the ‘lowlife wannabes’ trying to replace them are nothing short of embarrassing.

The parade of less-than-stellar metahumans exploits Joshua Williamson’s comedic touch, giving us hilarious new villains such as Sand Blaster and Bone Dry. There is even another cameo by Papercut, who was introduced in The Flash #10. As tiring as Barry finds them, I certainly wouldn’t mind an extra issue all about how these metas come up with their names. Not that they’ll ever measure up to the original Rogues, of course. 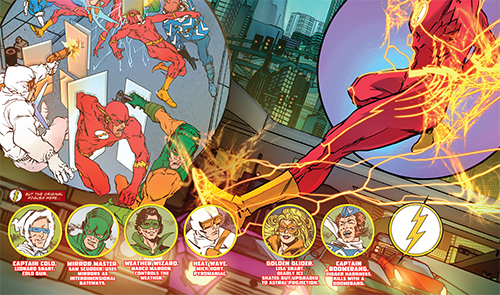 Speaking of everyone’s favorite team of criminals, this week’s issue deals a lot with whether the Rogues are still the villains they once were or if they have become something more akin to heroes. Prisoners in Iron Heights seem to believe Captain Cold and his ilk have gone soft, but warden Gregory Wolfe thinks they’re bad to the bone. Barry’s had so many different experiences with them that it’s hard for him to know one way or the other.

The introspection that Barry goes through isn’t necessarily the most exciting way to start an arc, but it does lay a strong foundation for the story that’s to come. And the calm before the storm allows for a fun family outing that lets Iris provide some intel on the Rogues while the writer hints at the Teen Titans-shaped secrets Wally is keeping. Another nice surprise was getting to see Hartley Rathaway again, as he and Barry embarked on a recon mission to uncover that ends up shedding some light on Hartley’s own motivations. 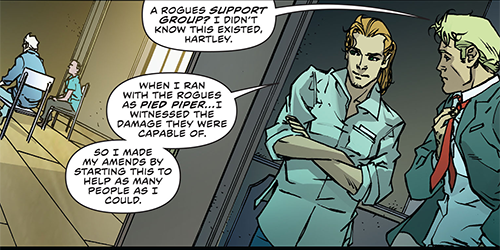 Hartley isn’t the only character who is given a good dose of backstory, though. Through their investigation, he and Barry learn a lot more about Leonard and Lisa Snart’s past… Which eventually leads Barry to the Rogues current hideout in time for the arc’s showdown to begin. Though the action in this issue of The Flash is somewhat lacking, the final twist sparks interest in the next step of the journey.

Carmine Di Giandomenico’s return is also a welcome event, as it brings his signature sense of motion to Barry’s race against the clock in the latter half. While his style took some getting used to at first, it now feels inextricably tied to Williamson’s run and brings a familiar warmth to the proceedings. Steve Wands and Ivan Plascencia both contribute in large part to the unified vision The Flash at the moment, and together the art team create a world that feels perfect for a speedster.

Verdict: 3.5 out 5 stars. A solid reintroduction to the Rogues, despite not containing much of their antics. It builds up the anticipation for a showdown in the near future and provides a nice amount of character development for various fan favorites.