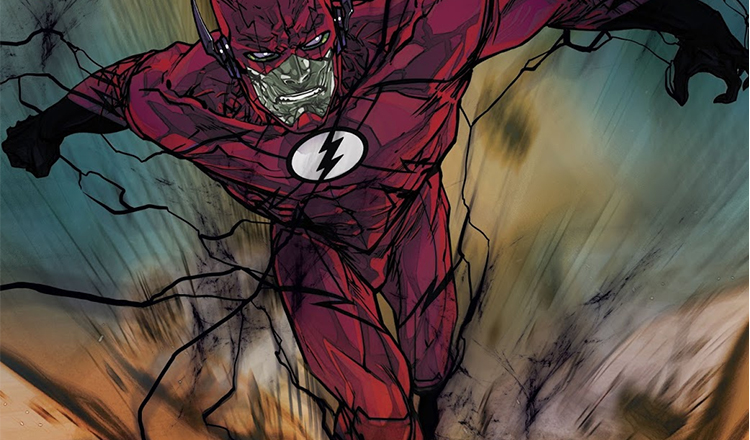 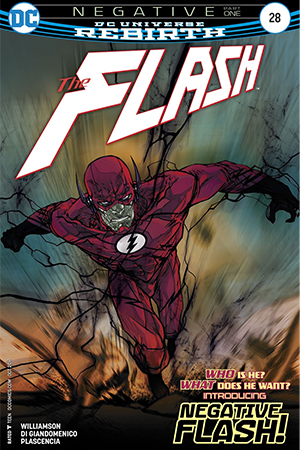 The Flash #28 marks the beginning of a new arc with a much more negative Barry, but it also introduces a new and mysterious villain. The story opens with lesser-known DC villain Shrapnel talking on the phone to a shadowy figure whose identity is obscured but whose agenda isn’t: teach the Scarlet Speedster who runs Central City.

Barry, meanwhile, is taking all of Eobard’s taunts and externalizing them. With his negative speed force-induced powers, he seems to be causing just as much destruction as he prevents. And the city is not the only thing in shambles, as his personal life isn’t faring much better. Between the breakup with Iris and the perpetual lateness to work, Barry is not having a good week. How can it possibly get worse? Joshua Williamson finds a way. 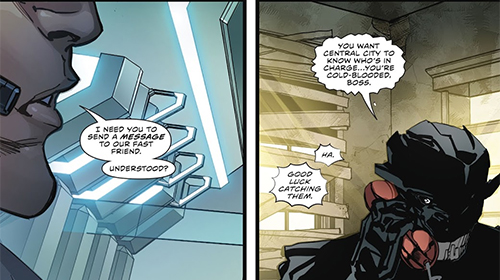 The “Negative” arc marks another instance of Williamson skillfully reflecting Barry’s own mindset in his surroundings without making it feel forced. The physical effects of his last encounter with Thawne are evident in the scorched Earth his powers now leave behind, but nowhere are they clearer than in Barry’s newfound sense of self-doubt and failure. Artists Carmine Di Giandomenico and Hi-Fi also manage to convey this in various ways. The constantly blurry lines denoting the speed force energies that surround Barry are shakier than ever in The Flash #28, showing how little he can control himself. While the kinetic energy that is this run’s trademarked is still present, it’s taken on a much darker edge. And the color palette is gloomier, too, in a way that feels distinctly different from the Flash stories we’re used to.

But Barry’s adjustment and mourning period seeps into more than his Flash duties; he can’t even handle a simple greeting from Forrest. It gets more complicated when Captain Singh has a special assignment for him and CSI Kristen, because Barry understandably doesn’t know how to deal work pressure on top of his inner turmoil. Even though the missing evidence subplot only takes up a few pages, I can’t help but feel it will be connected to the villain – and perhaps even to the Black Hole storyline that hasn’t been picked back up since the Button arc. 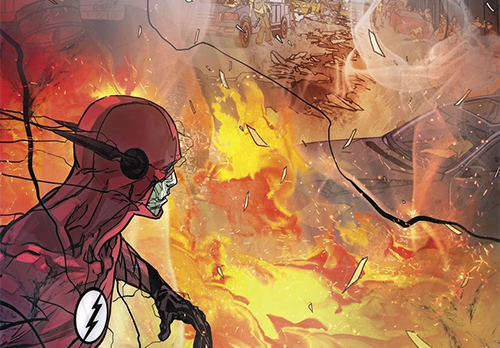 Of course, all of the havoc caused by Negative Flash and Barry’s personal life is nothing compared to what Shrapnel does to him at the end of the issue. The splash page certainly leaves readers wondering how Flash will get out of this one – or if he even can. In a way it’s reminiscent of the Future Flash storyline from New 52, but this time present Barry has done it to himself and doesn’t have an alternate future to blame.

Verdict: 4 out 5 stars. A solid start that flips everything we know about Barry and The Flash on its head. The story relies heavily on introspection as always, but that doesn’t take away from the intense battle sequences in which both the writing and the art shine. My only gripe is that Wally is still out of the picture, but perhaps his work with Deathstroke‘s team is not supposed to enter into the picture. Either way, I look forward to seeing what place Negative Flash will have in Barry Allen’s history.