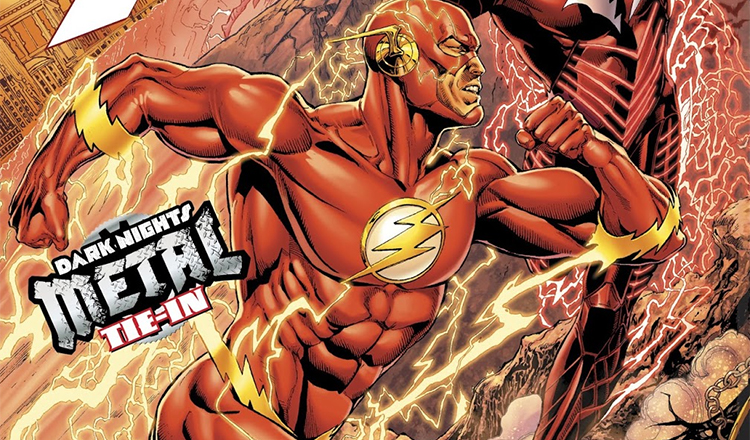 REVIEW: The Flash #33 – Barry and the Seven Batmen 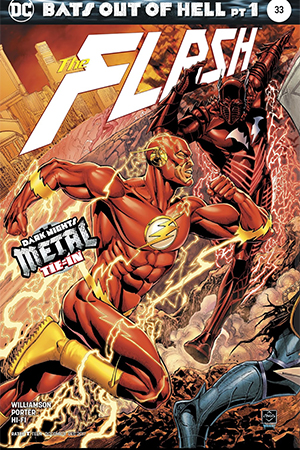 Skipping a little further ahead in The Flash’s comic book timeline, Flash #33 picks up right where Dark Nights: Metal #3 left off. Barry are Steel are both trying to get Superman through the Dark Multiverse portal in order to save Earth-0’s Bruce Wayne. Soon after that, in the process of checking up on the Justice League, he is set upon by some of the evil Elseworlds Batmen who have infiltrated our world. While it would be easy to dismiss this issue as just another tie-in right off the bat, Williamson takes the opportunity to further Barry’s personal journey while still expanding the world of Metal.

If there’s any issue with the narrative, it’s merely that it feels out of continuity for any reader who has been sticking to The Flash alone. The Flash #33 will be hard to understand without being caught up on the Metal event, plus clearly Barry is rid of his Negative Speedforce issues by the time it occurs. But that aside, it does a great job of not just recapping what has happened in the crossover event, but also furthering the plot in a critical way. 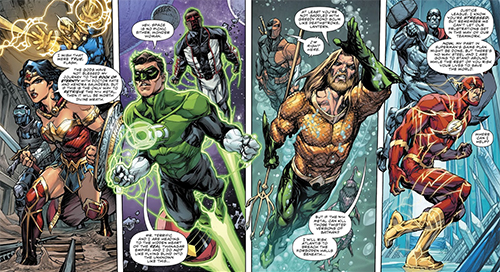 Howard Porter returns to the pencils of the issue, and this time gets a chance to tackle not just the entire Justice League, but also all of the Nightmare Batmen. There are many instances where characters seem to literally be coming out of the page, making for an immersive experience that heightens the tension of each moment. Hi-Fi’s coloring is also as vibrant as ever, but with appropriately darker tones to match the heaviness that such a cataclysmic problem brings with it.

The fight sequence between Flash and Murder Machine allows for pages of lightning sparking and panels that truly feel like they’re in motion. Plus Williamson sneaks in a reference to Bart (!!!) as well as a meta-textual joke about Barry’s biggest claim to fame being his death… Something which was arguably true when Crisis on Infinite Earths came along. Given how terrifyingly the one-shots have played out – especially Batman: The Red Death – there are real stakes in this issue and at times there is a real sense that something horrible could happen to Barry.

Speaking of Red Death, The Flash #33 actually ties it back in by showing what happened to Iris and Wally after the life was nearly sucked out of them. Again it’s a situation that’s perhaps emotionally ahead of its time, since Barry is still refusing to seek Iris out in the main story, but it previews an important step to come. More importantly, it clarifies some of Barry’s feelings about Eobard’s “death” (does anyone really think he’s gone?) and Iris’ guilt.

The Flash #33 ends on an intense cliffhanger that won’t be picked up in this series, but rather Justice League #32. While the title-hopping might be a bit of a headache, it’s worth it for the event overall. And Williamson once more proves that he brings a touch of humanity and heroics to every story in which he participates. Now all that’s left to see is whether those who continue from his stopping point can do justice to the same plot.

Verdict: 4 out 5 stars. Beautiful panels and an enticing story combine to make The Flash #33 a stellar issue. The only aspect in which is suffers is breaking the flow of Barry’s current story and perhaps hinting at how it might end up.