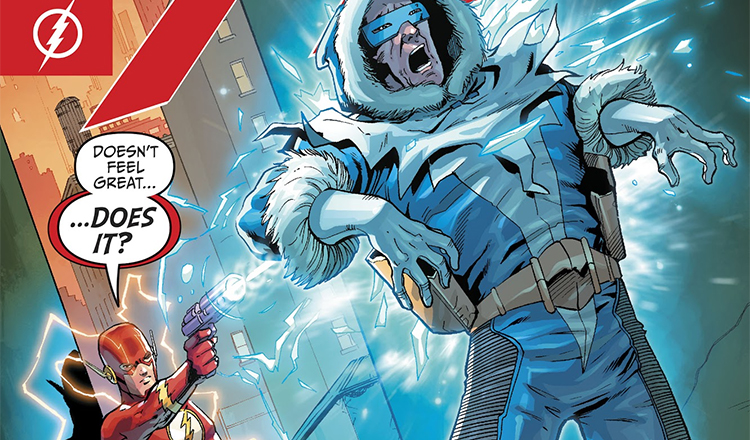 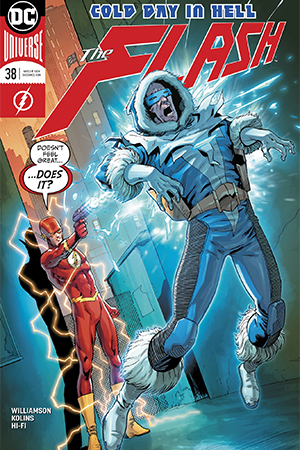 The Flash #38 picks up right where last issue left off, in the middle of a face-off between Barry and Captain Cold.  Snart is more ruthless and cruel here than in recent memory, but Williamson does a great job of stacking the deck against our hero before pulling the rug out from under the Rogues with a cool reversal from Godspeed. Not knowing which side August is really on keeps readers on their toes and makes the outcome of the battle a true surprise. It is also in the opening pages of The Flash #38 that Scott Kollins art style thrives, as he makes the most of different fighting styles for the characters and restores some of the kinetic energy that Di Giandomenico’s art was known for. Steve Wands also gets the opportunity to have fun with the lettering for the first time in awhile, and Hi-Fi’s coloring keeps the issue in artistic continuity with the rest of the run. The only problem – if you can call it that – is how different the characters feel with the change in pencils. Though emotions and expressions are still realistic, they are drawn in a way that feels more like a cartoon that before. Kollins is famous for his previous work on Flash, and it certainly looks good, it just takes some getting used to.

Regardless, the tentative team-up between Barry and August is fantastic, as is the former’s exasperated mentor routine with an impulsive Wally West. The young Kid Flash’s eagerness to catch the bad guy leads to Barry having save both his partner and his enemy, Copperhead. While we still don’t know the details of her mysterious boss or whatever Machiavellian plan he has in place, The Flash #38 finally succeeds in making her an interesting and likable villain in her own right. 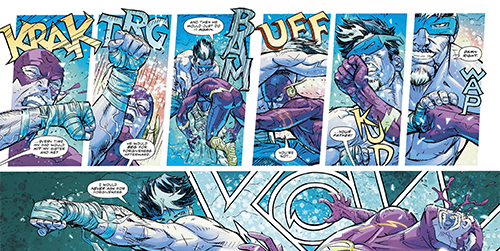 The rest of the issue focuses on the Iron Heights side of things, and Williamson wraps up the arc in a mostly satisfying way. Captain Cold gets his much-needed comeuppance and is sent to Belle Reve, thanks to both Barry’s CSI skills and August’s willingness to turn the Rogues in. It’s great to see the shades of grey in Godspeed, since his turn to the dark side was motivated by a desire to see justice done. It’s also nice to see Captain Singh be on good terms with his best CSI again, the first of many relationships that are hopefully on the mend. Kristen, on the other hand, seems to be bonding with Warden Wolfe – on Singh’s orders, which will probably make for an interesting story down the line.

It is the scenes with August that resonate throughout The Flash #38, especially his advice that Barry finally forgive himself and move on from his mother’s death. This leads to a gorgeously written scene where he apologizes to Iris in front of Nora’s grave, perhaps signifying the end of Barry’s grief and the beginning of his new life – one that includes Iris’ love and the Flash family. Readers must wait for issue #39 (the 700th issue of The Flash!) to see her response, but if the Dark Nights Metal tie-in from a few months back is any indication, Iris is sure to say yes. 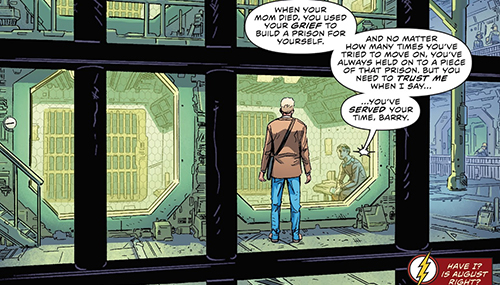 Verdict: 4 out 5 stars. A satisfying conclusion to a fun arc that made good use of the Rogues and of the Flash’s day job.