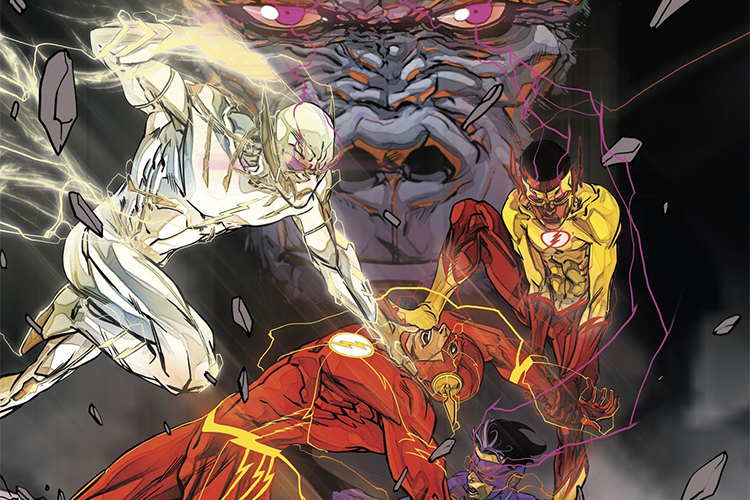 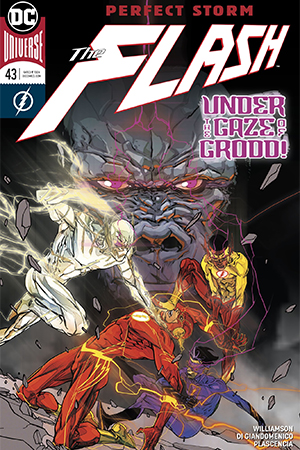 The Flash #43, which also thankfully puts a stop to Barry’s previously power-hungry ways. His behavior in the last few issues has been questionable at best, but it seems like the power of love and the Flash family helped him through the crisis. First of all, much as I suspected earlier, it seems like Barry has been unwittingly influenced by Grodd into acting out of character. The issue opens with Barry blocking out Grodd’s voice by listing the states of matter, which is a fun little callback to his scientific background as well as a way to show that much of his recent insecurity comes from Grodd getting into his head.

Soon the battle moves from internal to external as Barry is confronted by brainwashed members of his family, such as Wally and Avery, who throw his personal fears back in his face using Grodd’s words. As much as I loved this face-off between The Flash and his friends, it’s a little bit of a letdown only because their righteous anger at him is filtered through the mind control they’re currently under. Perhaps they are all too good-hearted (well, except for August) to go off on Barry this way if they were in possession of their own faculties, but Barry’s behavior over the course of the last few arcs does deserve some real backlash. That being said, there’s still Flash War to right some of his wrongs and hopefully get him back in shape as a hero. Plus, The Flash #43 provides an excellent opportunity for Joshua Williamson to prove that Barry still puts his family first when it comes down to the wire. He may have lost himself a bit lately, but his motives are still essentially the same. 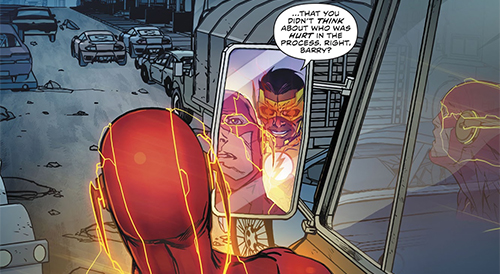 I must also point out that, as justified as a lot of the rage against Barry is, the idea that Meena has “real anger” that the others don’t is a little odd. She probably knew Barry the least, and yet he was most honest with her from the start. And her non-death at Godspeed’s hands happened through no fault of Barry’s, so it seems counterintuitive that she is the one channeling her real emotions into Grodd’s brainwashing the most. But then again, perhaps that’s precisely because she’s the most separated from him that she can be so easily turned against him.

That being said, having Carmine Di Giandomenico and Ivan Plascencia back on the art is especially poignant because Barry Allen is finally starting to return to the hopeful hero we met at the start of the run. It’s a great issue for them artistically speaking, because they’re given the chance to work with every current member of the Flash family and point out subtle differences in their fighting and lightning styles that go beyond the written word. Of course, one of my personal favorite moments is when Barry manages to momentarily break through older Wally’s mind control by reminding him of their first day together – and how Iris was there with them. Given how little Iris West has been featured in this run overall, it’s nice when her importance is acknowledged. Hopefully she’ll be showcased more in the next arc, as more than simply a symbol for Barry and both Wallys to draw strength from. 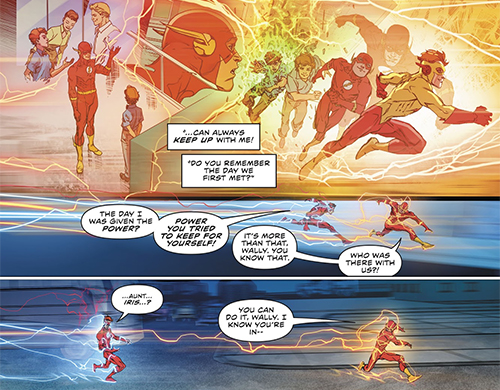 The best part of The Flash #43 is when Barry turns Grodd’s mind games around on him, refusing to play along and surrendering instead. Armed with the knowledge that Grodd needs him and therefore can’t actually kill him, he is able to him his enemy what he needs without also turning over what he wants. Or at least it seems that way at first, when he successfully cures Grodd with the adjusted pieces of the lightning rod that he collected while refusing to fight his family. In doing so, he also frees everyone from the brainwashing and so it feels like a happy ending is on its way. Except that there’s one issue left in this arc, so sadly this leads to the negative speed force filling the storm that’s taken hold of Central City. Grodd may be powerless, but he’s managed to unleash an even bigger threat.

Verdict: 4 out 5 stars. Both Barry and Grodd are at their best in The Flash #43, but the build up to this moment was a little less solid than Williamson’s work has been in the past. Nevertheless, the story is engaging enough and the visuals appealing enough to keep expectations high for the final part of the arc.