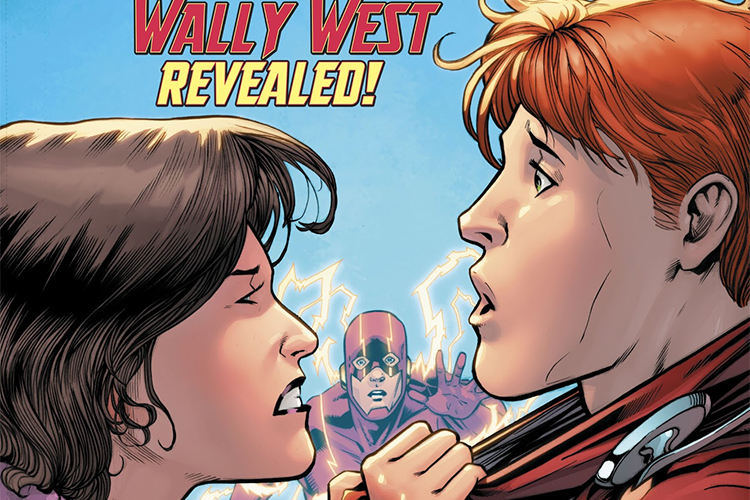 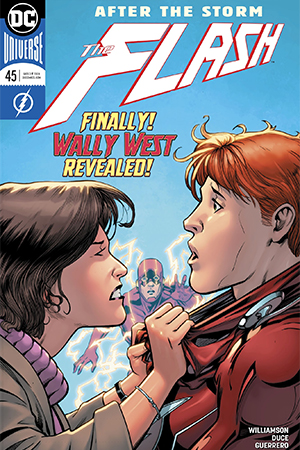 The Flash #45 serves as an pit stop between stories, with several loose ends either being tied up or branching off into new mysteries – sometimes ones taking place in other books. Meena Dhawan, for example, is in Iron Heights but she’s at peace with both her punishment and her original attempt to control the Speedforce. It’s an interesting choice on Williamson’s part to have her take responsibility for her actions instead of pawning it all off on Grodd’s brainwashing, but it’s one that will surely benefit the character in the long run. Meanwhile, we learn that Godspeed was rescued from the storm by a strange entity who offers to help solve his brother’s murder and make August a hero. We don’t get any immediate answers, but it’s definitely something to look forwad to post-Flash War.

Avery tries to entice the younger Wally (maybe I’ll start calling him Wally II?) to pay a visit to Beijing, but he swerves her and instead sets up an upcoming Teen Titans storyline with Damian that I didn’t previously know about but am now looking forward to. Sidenote: did anyone else sense some romantic tension between Wally and Avery? I like the idea of them while reading their interactions, but I’m pulling for Avery and Kenan in New Super-Man, so tragically it cannot be. All of these subplots might sound like they make for a convoluted issue, but instead The Flash #45 feels like a refreshing calm before the next big storm. Which brings us to the heart of the story: Barry, Iris and Wally. After a break that lasted far too long, Barry and Iris finally pick up where they left off and have an honest conversation about his life as the Flash and Iris’ feelings on it. And, boy, does Christian Duce make their conversation look good. 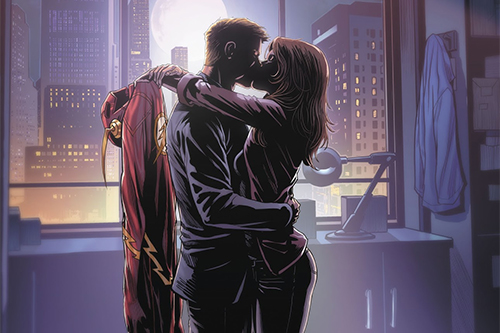 This is as good a time as any to praise the art team on The Flash #45, because Duce and and Luis Guerrero are a goldmine together. A change in artists can often feel abrupt, but the character designs are distinct enough to stave off any confusion and the result is truly beautiful. Guerrero’s soft yet dark colors perfectly match the realism of Duce’s characters, and the extra focus on their expressions suits the more character-driven plot well. And, of course, I would be remiss if I didn’t mention how much I love this particular design for Iris. The longer hair and extra shading make her look ten years younger than in the rest of the run, and I hope it stays for awhile.

But there’s more to Iris and Barry’s heart-to-heart than gorgeous art, and Williamson brings the old two-person love triangle trope back to reach a definitive conclusion. Iris has never wanted to date the Flash, and learning that it’s Barry under the mask doesn’t make him any less of the adorable nerd that she loves. For his part, Barry has had to accept that his powers don’t define him and he’s a worthwhile person all on his own, which I think is handled nicely here. With everything apparently sorted out between the couple, it’s time to start rebuilding the Flash family by introducing Iris to her other nephew named Wally.

The reunion between Iris and Wally is by far the most emotional moment in The Flash #45, and the most significant plot-wise. Not only do we get a touching scene re-establishing Iris’ memory of and her affection for Wally – after all, he once said she was the first person to ever love him, and their dynamic certainly shaped his early comic years – we also get an electric jolt of memories for Wally himself. It’s exciting for readers to catch moments like his wedding to Linda, not to mention an appearance from Bart (!!!), but it’s also the perfect set-up for Flash War. There’s no doubt Wally is going to have a problem with Barry having erased so much more of his life than he previously thought. But while it brings to mind questions about the nature of Rebirth and just how much Barry is responsible for, there’s a lot of meat to chew on before we reach the next arc. 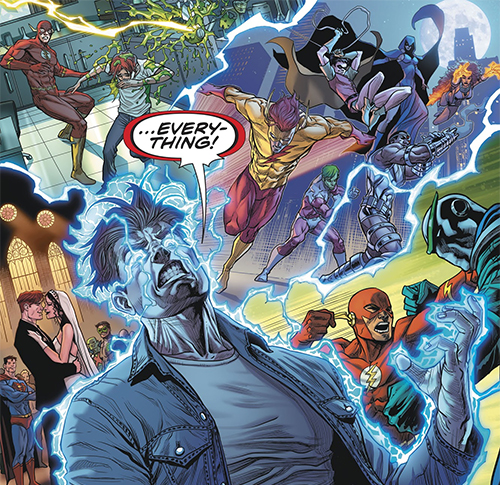 Verdict: 4.5 out 5 stars. The only thing stopping The Flash #45 from being a perfect issue is that there aren’t enough pages to hash things out between Barry and Wally already, because outside of that it’s exactly the kind of “filler” fans need. Williamson moves several character arcs forward while still seamlessly dropping hints of stories to come, and both Duce and Guerrero do some excellent work throughout.