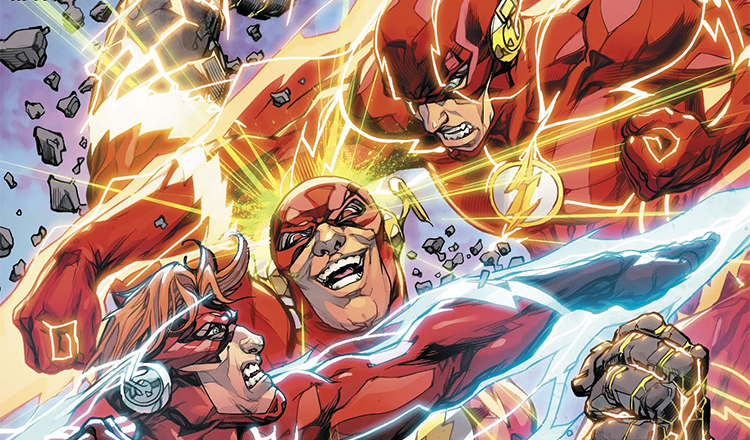 REVIEW: The Flash #50 – Fury of the Speedforce 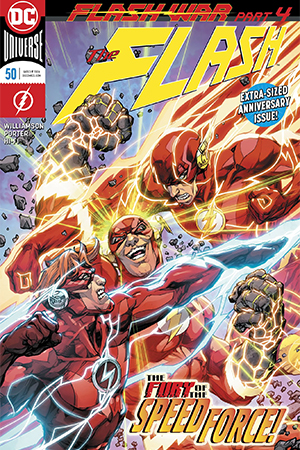 The Flash #50 sets the tone for both Flash War’s conclusion and the current run’s fifty-issue milestone with a quote from the late Nora Allen: “There is nothing wrong with losing as long as you remember we always learn more from losing than winning.” This certainly applies to the outcome of the war, which few fans expected to end with Hunter Zolomon getting the edge over everyone’s favorite Flashes. But as Barry reminds Wally in the opening pages, self-reflection is its own reward. The ending of The Flash #50 leaves several avenues wide open, and we are left to wonder how each hero will deal with the loss of time travel, but let’s discuss the issue itself before we get into what comes next.

While the character design makes the first leg of the three-way battle between Hunter, Barry and Wally somewhat confusing, Howard Porter and Hi-Fi do an impressive job of distinguishing one Flash from the other. Wally has the advantage of his red hair and silver details, but the real feat comes in the miniscule differences between Hunter and Barry specifically. It’s especially poignant as Williamson layers the similarities in their backstories as a narrative parallel to the visual of them fighting each other. Just as their paths wildly diverged simply because Barry chose hope over despair, the easiest way to spot him is the light in his eyes versus the rage in Hunter’s. And the classic lightning bolt versus the newer one, but that’s another less exciting story.

Given that Flash War was marketed as a final showdown between Barry and Wally, it’s a little disconcerting how quickly it became a team-up against Zoom – but that’s not to The Flash #50’s detriment. The hardest pill to swallow in the months before this event was adjusting to the notion of two cinnamon rolls battling for a title, a problem that Williamson deftly did away with by first putting Wally’s family at stake and then providing a much worse antagonist in the mix. 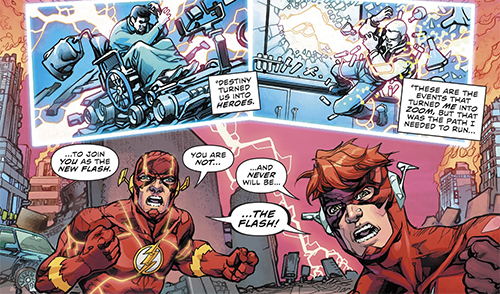 While the battle itself reaches an appropriately epic conclusion, some of the methods used to achieve it seemed a little unnecessary. Not only is there a Speedforce, there’s now a strength, sage and still force? Not quite sure what they add to the story, which is why it’s best to focus on how the boys evade Hunter’s attempts to “break” the Flash family. The villains may have put their idols on pedestals that later crumble to dust, but the reason the Allens and Wests have developed such a strong bond is because they see each other as family first and foremost regardless of the mistakes they’ve made along the way.

On the other hand, the younger Wallace West does experience something similar to the crumbling of a pedestal when he has to run Iris and Citizen Cold out of their nowhen predicament without any help from Barry. It’s great to see him step up and be the hero, and it’s nice to see the ‘lightning rod’ concept extend to the whole family in the same issue where Wally says Barry is the one that grounds him, but his ensuing anger still feels out of the blue. The sweet reunion between Barry and Iris is interrupted by Wallace rebuking his uncle (a plot point which was somewhat spoiled in the Teen Titans special a few weeks ago) and Wally taking off, which means there’s still a lot of pieces to pick up now that Flash War proper is over. 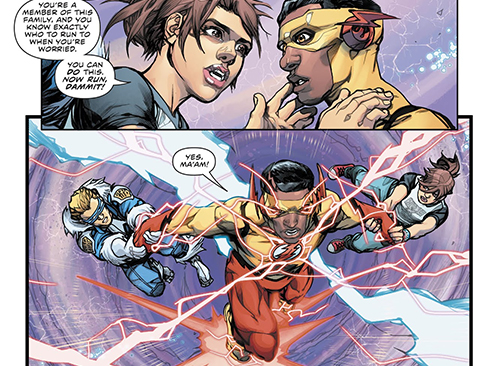 But none of the pieces are quite as exciting as the one that makes an appearance on the splash page of The Flash #50. I won’t spoil what it is, but anyone who’s been following the cameos and references throughout the latest arc can probably guess. It’s a great sign of what’s to come as well as an interesting curveball after so much of the current story focused on a different branch.

Verdict: 4.5 out 5 stars. Flash War ended with a bang and not a whimper, thankfully, and maintained its commitment to character dynamics and the importance of family throughout. While some of the action may have gotten lost amidst the sheer number of red Flash suits and new force names, the momentum never dropped and fans of Wally and Barry alike are sure to find things to enjoy.