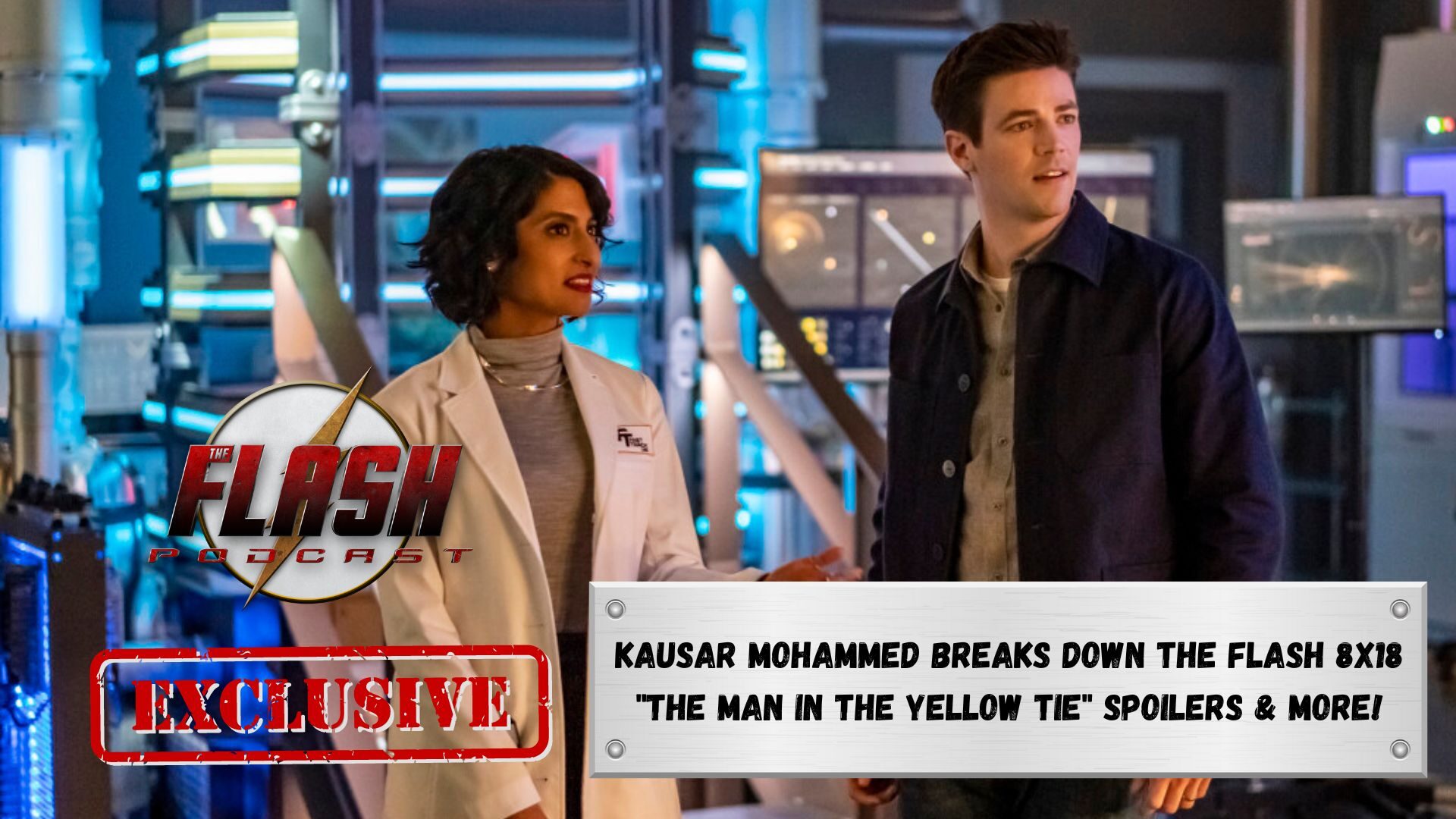 WARNING: This article include MAJOR spoilers from The Flash season 8, episode 18, “The Man in the Yellow Tie” – Read At Your Own Risk!

If you just finished watching tonight’s episode on The Flash, things took some really interesting turns, especially as we got to learn more about Dr. Meena Dhawan (Kausar Mohammed,) and the connection she has to Matt Letscher’s Eobard Thawne! As Meena has just begun her journey as a speedster, “The Man in the Yellow Tie” saw the DC speedster beginning her training with The Flash, but things definitely took some unexpected routes along the way. As Meena is set to be here for the rest of The Flash season 8, Meena will eventually be suiting up as Fast Track, like her comic book counterpart.

Now that “The Man in the Yellow Tie,” – a clever nod to the season 1 episode, “The Man in the Yellow Suit,” – has aired, what is next? The Flash Podcast recently was fortunate to chat with Meena herself, as Mohammed talked about landing the DC role and joining the Arrowverse. In part 2 of our exclusive interview with Mohammed, she talks about the big twist related to Meena’s dynamic with Eobard, the nods to her larger comic book mythology, and what fans can expect to see of her in the rest of season 8!

The Flash Podcast: I’m really interested to see fans react to the romance between Meena and Eobard – I’ve been trying to find a good name for them, maybe Meobard? I will let the fans decide [laughs] but can you talk about working with Matt Letscher, and developing that dynamic, especially this early in your run with this character since Meena just showed up last week?

Kausar Mohammed: Matt is so fantastic, I just want to say that, hands down. He’s such a generous scene partner, but also just someone who is so fun to work with. What I loved about him is that we really got to workshop the scenes together, run the lines and go through what felt right. We had that time to establish it and also moments of play within it. In those ways, Matt is so awesome and he has a history in the Arrowverse, on this show. I get a version of Eobard that is smart and funny and charming. But I know there’s many versions of that Eobard Thawne out there, but it was truly such such a pleasure.

The Flash Podcast: I know you probably can’t spoil whether or not she will ever find out. But if Meena were to find out who Eobard really is, how would she cope with that? How would that change her perspective on this man? Because I’m not gonna say that Barry was subtle about it because he really wasn’t as he was really angsty against him, for justifiable reasons, obviously. But how would Meena deal with learning who Eobard is and the history he has with The Flash?

Kausar Mohammed: I think what we get to do in these next couple episodes is explore these characters, explore the histories, but then also explore what that means now, especially in regards to The Flash and, his commitment to protect the world. So all that sort of comes back around and in regards to Meena and Eobard; They get to have their relationship! [laughs] 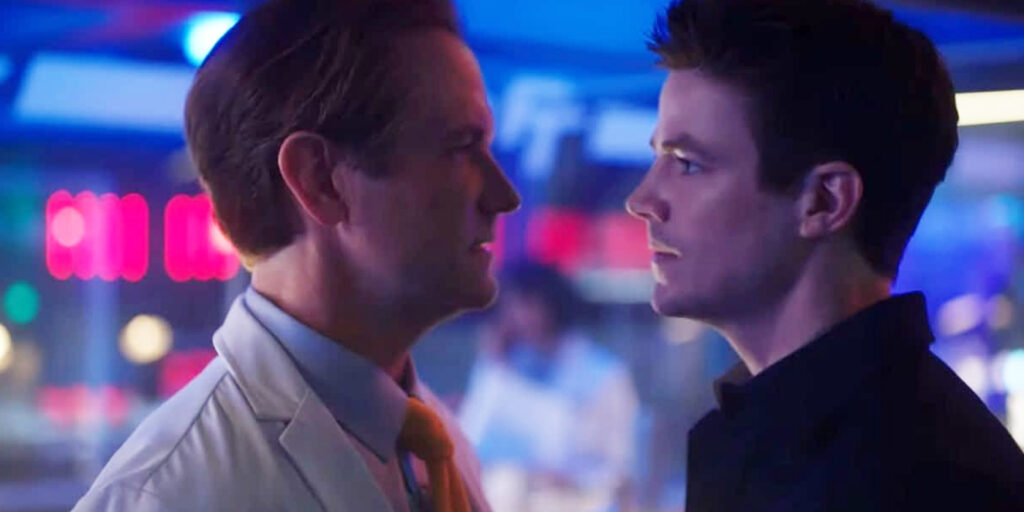 The Flash Podcast: Okay, very cryptic! Speaking of cryptics things coming up, I spoke to [showrunner] Eric Wallace a couple of weeks ago and he already confirmed to me that Meena is going to suit up, we’re going to see you in that costume. So without giving any spoilers, I would love to hear your experience. How was that moment for you getting to see yourself as a superhero from seeing the concept art and then to actually being on set wearing it?

Kausar Mohammed: It was, I think, one of the most rewarding and also one of the most challenging things, but mainly rewarding [things.] To be fully down in the suit and look in the mirror and be like ‘Oh my god, I literally have a super suit on right now!’ This is beyond my dreams and it truly was a collaboration from everyone. Through Kate [Main], the costume designer to the team at hair, we had to make sure my hair was placed perfectly, to make sure the cow will fit properly, down to the makeup, like is my eyelash hitting the side of the cowl? All those things and putting it on was a 10 minute process every time from the body armor to the zip up and it was such an experience but also so much fun. Being in the superhero suit, I always felt like ‘Okay, I’m ready to get into a fight [as Meena] who wants to go?’ Like automatically I was feeling ‘Oh, yeah, let’s go down!’

The Flash Podcast: That’s the accurate spirit to have because that’s how I would feel too if I was suiting up, so I feel you! We saw Meena take a temporary dark turn this episode, which as a comic book fan, I saw it as a very big nod to her time as the Negative Flash in the comics. Would you say that we’re kind of out of the clear from that or what are chances things could still get complicated as we close out the season?

Kausar Mohammed: So certainly, Meena and Barry are allies now. We still learn more about the Negative Speed Force and what is the block, how did this happen? I think in those ways, it adds to our culmination, so that’s what we’ll continue seeing more of.

The Flash Podcast: We saw Meena having met most of Team Flash by the end of this episode. I know next week Iris makes her big return so I wanted to ask, do we get to see the two of you meet? Is there anything you can tease about that as Iris returns for this 2-part finale from wherever she is?

Kausar Mohammed: I think we get to see interactions with lots of other Team Flash members as we go, you know? I will say that! [laughs] 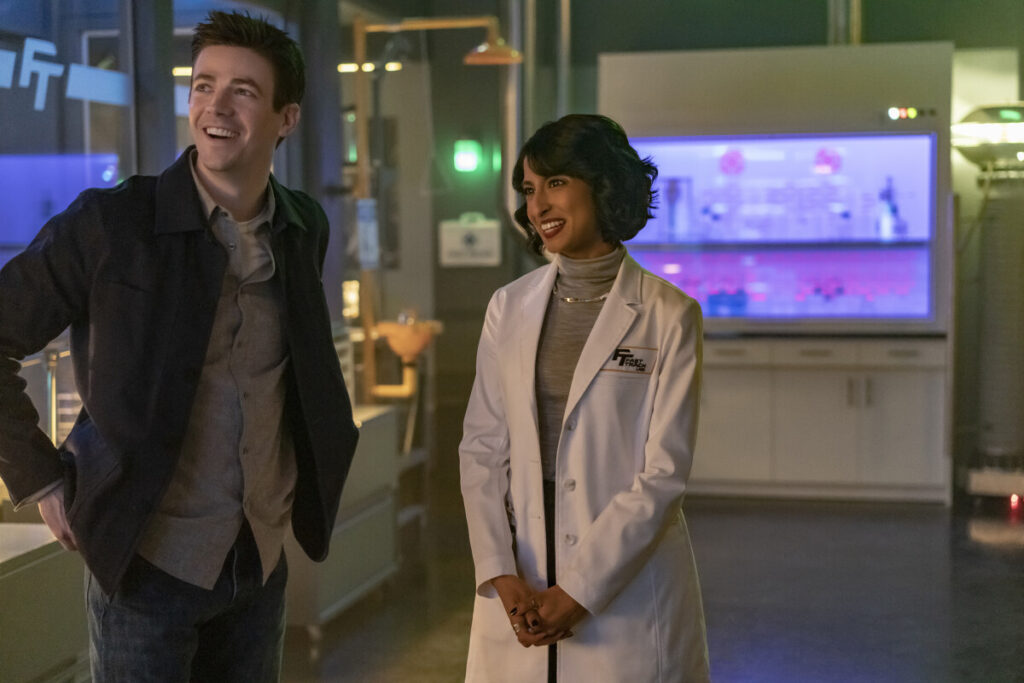 The Flash Podcast: OK, I will take that! [laughs] I know sometimes actors don’t get to see the episodes until they actually air, but have you been able to see them yet? If so, have you heard Meena’s theme that they have given her? It’s kind of this angelic-singing theme anytime she’s running or there’s the emotional moments, have you gotten to see and hear that yet?

Kausar Mohammed: I’ve gotten to see bits and pieces through ADR actually, so nothing too much, but when I see it, even just seeing it in its somewhat final form with the VFX and all that, it’s so surreal and so cool. To go ‘Oh, this is my character and I have superpowers,’ that will never not make me feel like a little happy, joyful kid. [laughs]

The Flash Podcast: On that front; we’re starting to see so much more representation of Brown, Middle-Eastern, and South Asian superheroes. Last Wednesday was like a wonder, the day started with Ms. Marvel, and then in the evening, we had Meena Dhawan enter the Arrowverse on The Flash! So do you feel that door is opening up more on your end and also, what do you think the next steps are for Hollywood to raise it even further?

Kausar Mohammed: Absolutely. So I identify as South Asian, to be playing a South Asian character and then I remember, a friend pointed out that ‘Ms Marvel, the show, and your character Meena Dhawan on The Flash, debuted on the same day!’ I just remember being in awe, because I think if you would have asked me 2 years ago if this is possible, I’d be like ‘No, it’s just not happening. Our stories just aren’t in the mainstream yet. We don’t see ourselves reflected back yet.’ So to see that is truly such a powerful thing. Because I also believe that we deserve to see our own stories on[-screen.]

On top of that, in regards to the question of what’s next is even more of them. Because there is no monolithic story of South Asian, of Middle Eastern, of Muslim, of Queer; we need to see more and a bigger breadth of these stories. It’s never enough to just have one because we exist fully as humans and our identities and we have all these intersections. I’d say that’s the next step of continuing and not stopping and really supporting each other stories.

The Flash Podcast: Before I let you go; you mentioned how you jumped into research when you got cast as Meena, what is the thing that draws you most to that character? She gets to be a superhero, she has these amazing powers, but what is it that you love the most at the core essential about Meena?

Kausar Mohammed: At the core essential part of her, even just from the moment I saw the script, I was really drawn to this person who was really committed to democratizing speedster powers to heal the world. On a basic level, what I appreciate is just her desire to use science for that. I think that, on a human level, you see a character who’s really trying to figure out and get stronger control over these new powers that she has. If I literally wake up tomorrow and realized, ‘Oh, I now have super powers,’ what a scary thing and big responsibility that would be. But this is what happened to Dr. Meena Dhawan so I feel like letting the story itself speak for itself and reminding myself of that is what I hold on to for the character.

The Flash Podcast: Well, I’m so excited for you. I have really enjoyed your first two episodes and I can’t wait to see what comes next for Meena. Perhaps we will see you next season because I feel her story is just beginning. So again, congratulations on joining this amazing universe and I can’t wait for fans to see the episode because, damn, things go down in tomorrow’s episode, to say the least!

Kausar Mohammed: It’s juicy, it’s real juicy, y’all! Thank you so much, it was so good chatting with you. I hope everyone checks it out and gets to follow Meena Dhawan on her journey, I’m very excited and I hope I can bring the character justice.

WHEN NOTHING IS WHAT IT SEEMS – With a new speedster in town, The Flash (Grant Gustin) gets much more than he bargained for, meanwhile Cecile’s (Danielle Nicolet) powers experience a growth spurt allowing her to aid Team Flash on an entirely different level. The series also stars Jesse L. Martin, Candice Patton, Danielle Panabaker, Kayla Compton and Brandon McKnight. Marcus Stokes directed the episode written by Sam Chalsen (#818).

The Flash season 8 airs new episodes on Wednesdays at 8/7c on The CW – stream the latest episodes the following day only on The CW and The CW app.