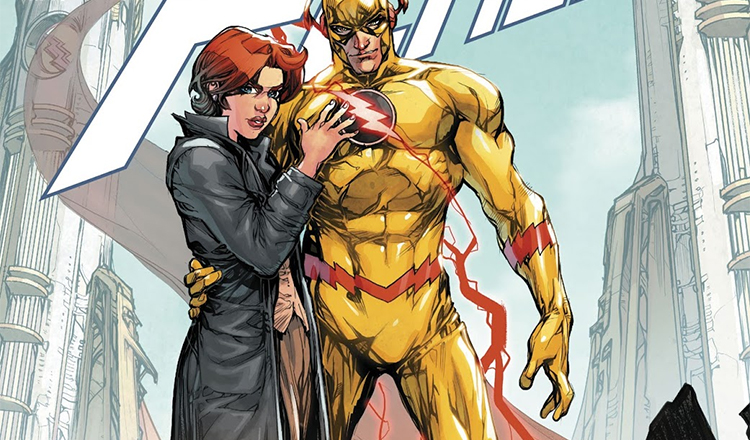 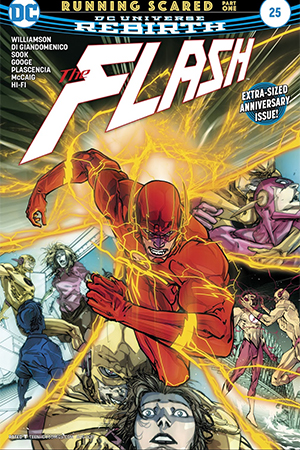 The long-awaited “Running Scared” arc is off to the races with The Flash #25, a packed introductory issue that stays true to the series’ 60+ year history while re-imagining elements. While Barry is chasing Reverse Flash and Iris to the 25th century, readers are transported to a brighter and more innocent future courtesy of Neil Googe. Younger Barry runs into a surprisingly chipper Eobard Thawne, a Flash uber-fan who gave himself powers and wants nothing more than to train under his idol. From Barry’s perspective, though, Thawne was hurting people to try to help them and had to be sent to jail. Despite promising to become a better man, he instead turned himself into the Reverse Flash and killed Barry’s mother – leading to a never ending rivalry and even the creation of Flashpoint. 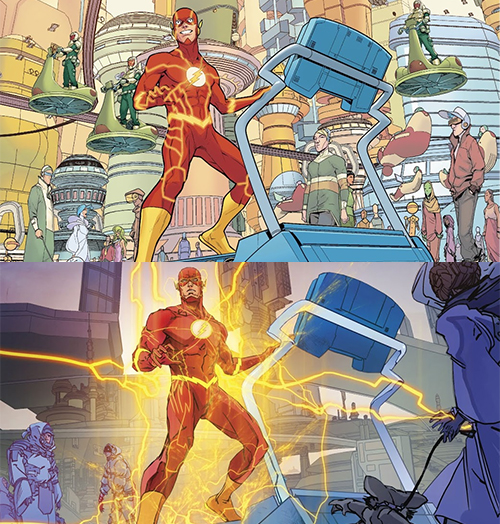 The future is starkly different, and not simply because of the excellent work of the issue’s colorists. Instead of a collection of interested onlookers, Barry is greeted by a police force who is deeply against the Flash. What might have changed to make this darkness come to pass? He doesn’t have time to contemplate it, though, because he’s mesmerized by the contents of the museum – everyone in this life from the Justice League to Godspeed to Kid Flash to Iris West herself are encased in holograms that immortalize the Flash’s past.

Barry thinks he’s protecting Iris from getting murdered (again, not that he remembers) by Eobard, but he doesn’t know what really lies in what at the end of Reverse Flash’s master plan. First, though, readers are treated to another origin story for The Flash‘s most iconic villain. While many fans hold the tale of ill-fated prophecy from “The Return of Barry Allen” near and dear to their hearts, “Running Scared” breaks Eobard’s spirit in a more straight-forward way. The young man who so desperately wanted to be Flash’s partner had to learn that he wasn’t special to his idol, just another one in a line of hopefuls that Barry wanted to help.

This may seem like an inane reason to turn evil, but Joshua Williamson illustrates Eobard’s mindset perfectly from the start of his monologue. As a young man with nothing and no one to turn to, one who’s already prone to hurt others for his own gain, it makes sense that he would break totally when the one thing he hoped for falls through. Furthermore, Ryan Sook makes an incredible entrance into the gallery of The Flash‘s art, with rich and detailed line work that focuses on characters on their emotions in such a way that it’s impossible not to least understand Eobard (if not sympathize with him). 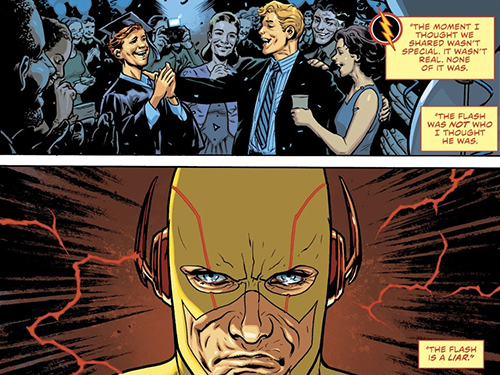 Di Giandomenico takes back over as Eobard gives Barry what he believes is a well-deserved thrashing, and both he and Williamson ratchet up the tension as Iris and Barry’s lives hang in the balance. That is, until the shocking splash page suggests that their individual lives may not be as in danger as the life they’re meant to build together. Unfortunately we have to wait another two weeks to find out what comes next.

Verdict: 4 out 5 stars. The Flash #25 is a well-crafted anniversary issue with a wonderful sampling of artwork from the book’s veterans, as well as some exciting new art from Sook. Readers’ opinions on the first part of the arc may vary based on how they feel about the latest Reverse Flash origin story, but no one can deny that Williamson’s storytelling is emotionally rich and powerful. And that, no matter what happens next, Barry and Iris will never be the same.