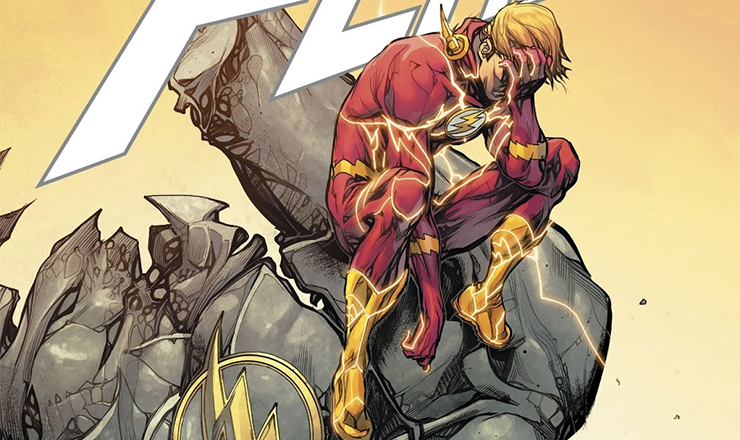 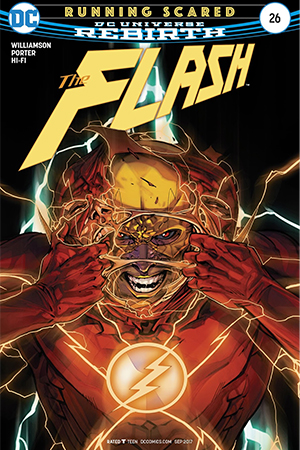 The Flash #26 plunges readers into a dark future in which Central City is being destroyed by the Tornado Twins. That’s right, in the vision Reverse Flash has conjured up of Barry’s future, not having a father figure in the home has made his kids evil. Whether this is a certainty or not – and I’d like to think not, since Iris should be able to raise children even if Barry’s off being a superhero – matters less than it being an effective method of manipulating the Flash’s confidence in himself.

The pages detailing such an unpleasant future are beautiful to look at without detracting from the tension of the moment. Howard Porter gives us an older Barry and Iris who have aged remarkably well, but Barry’s expressions especially contain traces of all the horrors he’s seen. And once they step outside, the ravages visited upon Central City are wonderfully depicted, along with some literal tornadoes signaling Don and Dawn’s arrival. Disobedient kids aren’t the only problem in the future, though – and Joshua Williamson adds some final touches in the dialogue that paint a bleak picture for everyone. It sounds like Wally died young, and Barry himself did a stint in Iron Heights with August. How could all this have come to pass? 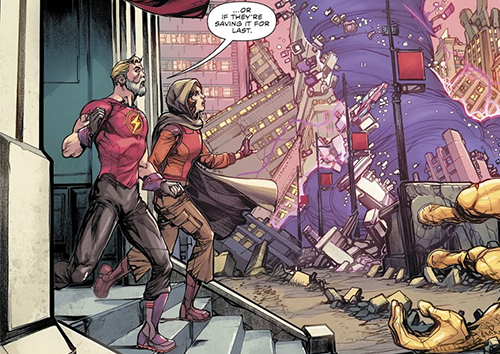 Despite his denial, the future shakes Barry visibly. And it doesn’t help that he was just uncovered as a liar as well. It’s very easy to follow his emotional downward spiral here, as he contemplates the idea of failing as both a husband and father in the name of being the Flash. However, Reverse Flash’s deal is a much tougher pill to swallow. No matter how insecure Barry feels about his choices, how is he going to trust Eobard to leave Iris and Wally alone and agree to essentially erase himself’? It’s one of the very few times where I couldn’t suspend my disbelief enough to follow along.

Thankfully this plot point doesn’t last long – it merely serves as a way to jump start the next arc. And furthermore, the emotional beats feel very real even if there’s a flaw in the logic. Barry’s self-recriminations in the Negative Speedforce are poignantly written and drawn, and they contrast nicely with Iris taking action without skipping a beat. He’s one of the fastest men alive, but Barry Allen spends a lot of time paralyzed by his own doubt. It’s only natural that his partner keeps pushing forward instead, though she has no powers to speak of. Meanwhile, Thawne delights in tormenting them both and emerges once again as the most terrifying Flash villain in its 60 year history.

Carmine Di Giandomenico and Ivan Plascencia were entirely absent from The Flash #26 – not including the cover – but their presence can still be felt in the issue. Porter has different models for the characters, but his pages are still filled with the crackles of Speedforce lightning that have now become a signature of Williamson’s run. Hi-Fi’s colors maintain the same vibrant energy as previous issues, though his palette is noticeably different. It makes for a refreshing change of pace while still feeling like it belongs in the same world that The Flash has created in Rebirth.

Verdict: 4.5 out 5 stars. The end of The Flash #26 ramps up the tension even more, as the confrontation between Thawne and Iris is interrupted by a very startling return that sets up the next arc perfectly. Reverse Flash has served the series well since the Button crossover, and Williamson makes him a compelling antagonist to Barry while still question who the true villain of the story is. Aside from a lapse in logic on Barry’s part, this issue is an emotionally honest look at the sacrifices that come with being a hero.