On the fourth episode of Season 2.5 of The Flash Podcast’s summer season, Andy Behbakht is joined by several terrific guests, with Brian Roll (better known as the artist Odyssey Art Torch who we teamed up with for a giveaway a few months ago!) as well as Nerd Repository’s Kyle Wilson (who guested on last year’s summer season) and Alan Schuler, for the third character review for Season 2.

As we have discussed several of the heroic supporting characters in the past few weeks, this week it’s all about the big bad of Season 2 – Hunter Zolomon a.k.a. the terrifying Zoom, played by Teddy Sears. Throughout the discussion, the four nerds discuss Sears as Barry’s latest villain who at first posed as Jay Garrick, the Flash of Earth-2 before being revealed as Zoom. How does Hunter compare to the show’s first big bad, Eobard Thawne a.k.a. Reverse-Flash? What did they feel about Hunter’s backstory and motivations? Who would they want to see as the big bad of Season 3?

In addition, they discuss the big news of Arrow’s John Barrowman signing on to be a series regular on not just Arrow, but also The Flash and Legends of Tomorrow. How will the Dark Archer fit in on these other DC TV shows? That and more on the summer season of The Flash Podcast! In addition, check out Brian’s new art of Hunter Zolomon a.k.a. Zoom below, first revealed here on The Flash Podcast! 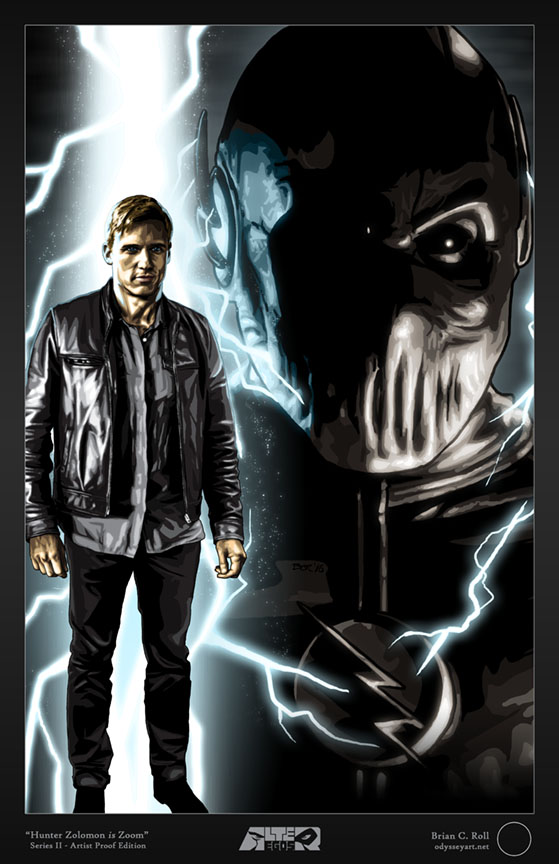 [NOTE: This episode was recorded on Monday, July 11, which was the day BEFORE the news of Keiynan Lonsdale’s Wally West becoming Kid Flash in Season 3 which is why there was no discussion about the news – but don’t worry, we will talk about it on air next time!]