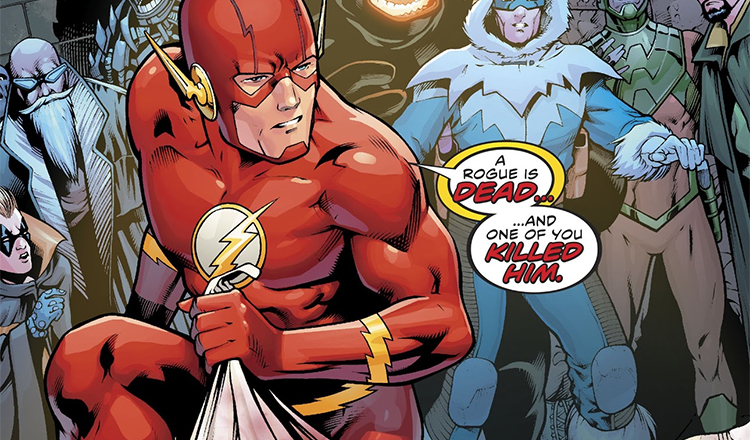 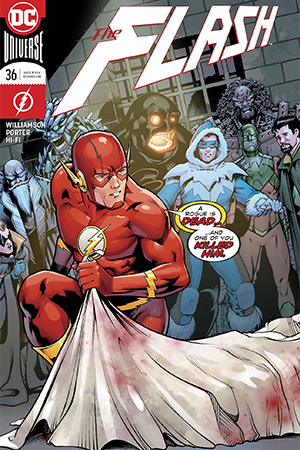 The Flash #36, but that doesn’t mean his usually sunny disposition is back quite yet.  Of course, that may have something to do with the fact that there’s been a gruesome murder at Iron Heights, and he no longer has the jurisdiction to help solve it the way he wants. It is this murder mystery that becomes both the strongest part of The Flash #36 and its weakest link. How so? The set-up is excellent, drawing readers in with the promise of Barry utilizing his finely-tuned detective skills in a Clue-like tale of terror – and Howard Porter’s art makes the word-building as enjoyable as possible. Every panel is filled to the brim with detail, not to mention bright and captivating colors courtesy of Hi-Fi. But, due to the events leading to this issue, Barry cannot do his job properly and therefore the promise contained in the premise is not realized in this issue.

The opening page of The Flash #36 is a lot fun, providing snapshots of cases Barry has solved and presenting them as Sherlock Holmes novels. But even the narration itself takes a humorous concept – present even in the dialogue that Williamson includes within these hypothetical mysteries – and turns it dour. Obviously murder isn’t and shouldn’t be fun for Barry, but the dread he feels upon arriving at the crime scene is only magnified by the way he is treated by his coworkers and superiors. It reminds us that Barry is not currently in anyone’s good graces (except for Wally’s sometimes), but hopefully he makes progress on that front so that the heaviness of the stories can rest on the villains and crimes rather than the main character. 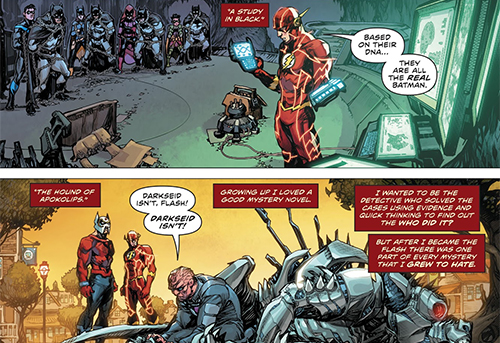 The bureaucratic shuffling lasts a few pages too many, but Porter’s artwork makes even Iron Heights look like a place worthy of visiting and manages to imbue background sequences – such as the Rogues being questioned about Turbine’s death – with life and meaning. Various Rogues make exciting cameos throughout The Flash #36, most notably Trickster when he rushes onto the page claiming he’s guilty of the murder. And of course, Turbine himself gets his backstory played out once more in case the audience forgot him. His death works as someone Barry might feel connected to through the Speedforce, but it still feels like a bit of a copout since of course none of the Rogues we know and love well were going to bite the dust.

It’s a downer that Barry doesn’t get to do any real investigative work after Kristen preserves the crime scene, but his questioning of August (AKA Godspeed) is interesting if not particularly illuminating. It’s clear the Rogues are lying to cover something up, but that side of the mystery doesn’t get its due. Instead we are spoonfed information about the problems Copperhead has been dealing with when it comes to the new mystery boss in town. It’s very intriguing set up for future issues, though, and thus makes me hopeful for more Rogue shenanigans and CSI Barry soon.

The Flash and Kid Flash team ups remain one of the book’s highlights, especially because Wally infuses the battles with all the energy that Barry seems to be lacking lately and it shows in the art and dialogue. I’m waiting to see where the deconstruction of Barry’s life is going on a thematic level, but I can’t deny that I’m more than ready for him to get back on track personally and professionally. And of course, the lack of Iris is doubly glaring now that Wally’s integrated back into the story as well. At least for now it seems the Flash is recovering, even if the Rogues remain a few steps ahead of him… for now. 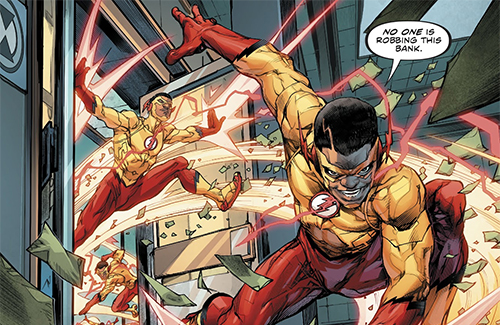 Verdict: 3.5 out 5 stars. A very interesting start to a new arc that’s delivering on the Flash front as well as by providing enjoyable villains, but the Barry Allen side of the story is dragging its feet a little.