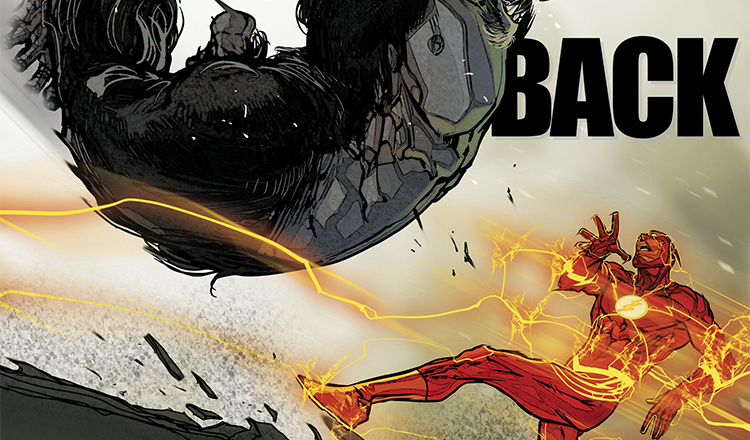 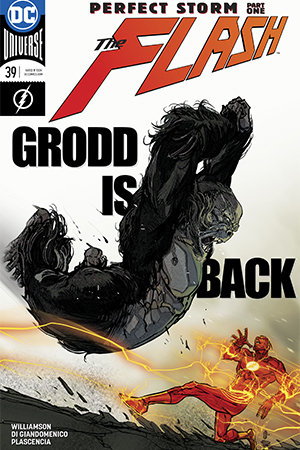 The Flash #39, which doubles as the 700th issue of the title ever, gets the old band back together to do Barry Allen justice. That is, Carmine Di Giandomenico and Ivan Plascencia return after a short absence to handle the art of the book – and it’s a welcome sight. The story itself is also a refreshing change of pace after all the turmoil Barry’s gone through, but there are some moments where trying to do too much results in less of an impact. Gorilla Grodd on the cover is one instance, but we’ll talk about that later.

First there’s Barry’s apology to Iris to deal with, a painfully honest conversation over ten issues in the making. And though Iris is right that his mother’s grave is probably not the most appropriate location to rekindle their relationship, it’s a relief to finally see them air out their issues and start over. Not to mention the huge part Nora’s death plays in the origin story of the Flash, making the journey from her grave to the Justice League watchtower particularly fitting. The Flash #39 contains a full-page panel juxtaposing Iris and Barry running alongside various memories from the past, a scene that underscores the spark that makes this art team so special. 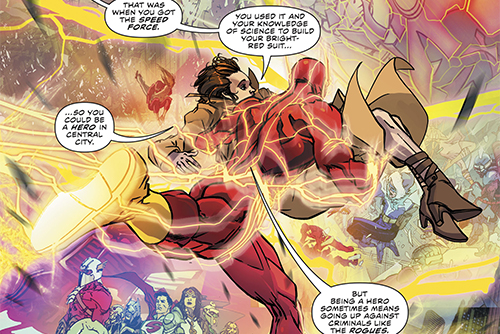 Their trust issues are not magically resolved while at the watchtower, but we do get glimpses of the old lighthearted Barry Allen – such as when he quips that Batman’s grouchy face is his default. Once again, Iris brings up that Barry is protecting himself with his secrets rather than her, and The Flash #39 may be the first time he gets a little introspective about that accusation. Not only does he consider what continuing to hide the other Wally and Flashpoint from her might mean, but a voice in his head wonders whether learning more about his alter ego may make Iris less interested in the regular CSI side of him.

It is precisely this voice that encapsulates the crux of The Flash #39. Who does the voice belong to, and what do they want? As Iris and everyone else in Central City freezes around Barry, he suddenly finds himself attacking by speed-enhanced Multiplex who has been sent by Meena and her boss Raijin. But despite how many issues it took to reveal Raijin in the first place, he isn’t the one running the show. Instead Barry comes face to face with the so-called true god of the Speed Force on the splash page: Grodd.

Granted, the tension builds beautifully in the final pages of The Flash #39. And the fake-out with Meena and Raijin works because we’ve been waiting to see what his character would do, so learning that he’s merely servicing someone else comes as something of a surprise. But the otherwise well-developed shock is completely undercut by a cover that proudly proclaims Grodd’s return before any reader has a chance to think about him. And while that’s not the fault of the issue itself, it’s also not something that can be easily ignored. Regardless, the question of what Grodd wants with the Speed Force and why his life depends on it certainly raises the stakes for the upcoming arc. 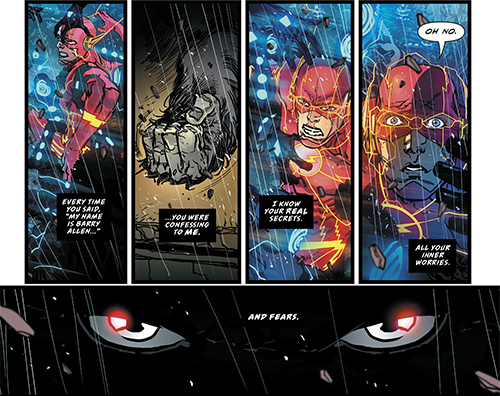 Wally West, the current Kid Flash, also gets a side plot of his own and a guest star in the form of Avery. The two of them have some very sweet banter, and there’s a nice level of continuity with Dr. Karver’s trial and Black Hole, but it doesn’t really go anywhere this issue. Surely the mystery they are faced with will get more play in the next sure, and it’ll be interesting to see him and his mentor tied up in separate but connected stories.

Verdict: 4.5 out 5 stars. Both a lovely interlude and an intriguing set-up for the next major battle, The Flash #39 only suffers a little from giving away the milk before anyone can buy the cow.