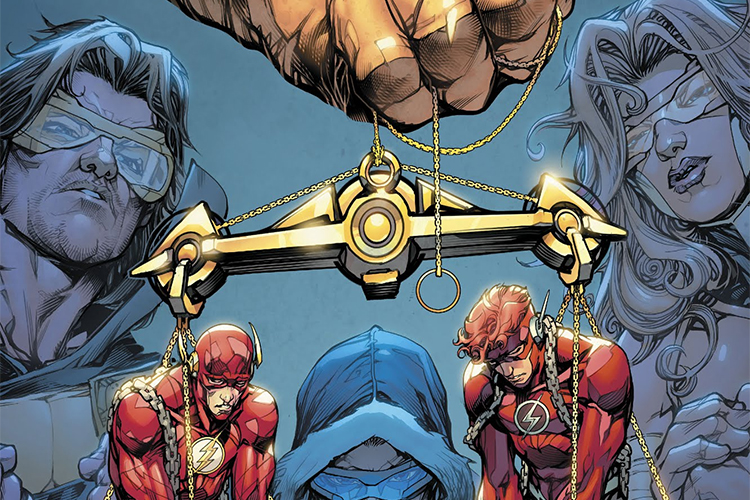 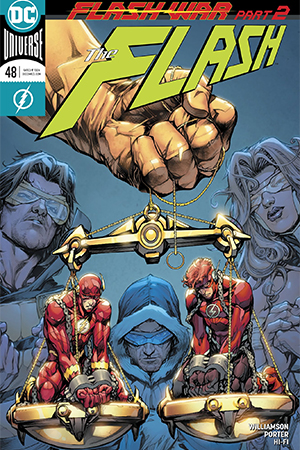 The Flash #48 is when Flash War truly takes off running, with Barry and Wally’s sides of the argument both pretty fairly balanced. This was one of the biggest concerns going into the arc, because the two men are so close and so good that it’s impossible to imagine them being at odds in such a drastic way. But once again, Williamson makes us believe in the impossible (to quote the television series) by using Wally’s family against him in a perfectly agonizing twist. Which is exactly why The Flash #48 opens on a memory of a time long forgotten, with Wally training his kids on how to use the Speedforce.

Despite the immediate shock, Wally remains resolute against falling into whatever trap Hunter has laid. It’s actually a relief to see him stand his ground for as long as he does before the emotional turmoil begins chipping away at him, as it feels more realistic than launching him into all-out war against Barry at the drop of a hat. This is also where Howard Porter’s classic artwork shines, buoyed by Hi-Fi’s rich and layered coloring, expressing Wally’s loss and pain beautifully. A simple panel depicting empty suits alongside photos and statues of those no longer in the heroes’ lives conveys the urgency of regaining family members just as well as powerful speeches from Wally and Zolomon alike. There’s also another surprisingly poignant panel where Wally punches Hunter only to recover even more memories, which is a trick that works wonders for the readers despite being one that Flash War has pulled a few times already. 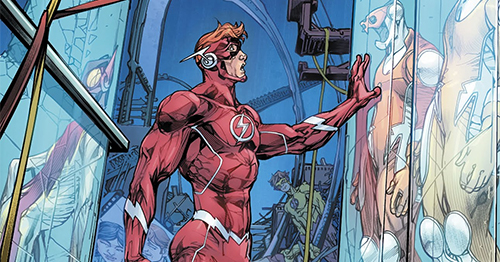 While Wally is slowly being convinced that destroying the Speedforce is for the best, the rest of The Flash #48 focuses on the reveal of Iris’ trial as a sham. Where is was nice to see the steps taken to ‘turn’ Wally, it’s just as great to see how quickly the misconceptions surrounding Iris’ self-defense murder of Eobard. This sends Barry down a bit of a rage spiral, taking out his worry for his family on the the Renegades instead. The two sides of the Flash family come together in the back half of the issue, but it’s a confrontation rather than a team-up and it leads to the heartbreaking argument teased at the start of The Flash #47.

Also heartbreaking is the moment in which Barry and Iris remember Wally’s children, especially as it leads Iris to question who else they’re forgetting. We know the answer to that even if they don’t, and it raises the stakes for whenever they do find out. Speaking of raising the stakes, Barry’s insistence on preserving the Speedforce because he’s seen the consequences otherwise feels like a straightforward case of logic versus reason until the twist at the end of the issue. With Iris and Wallace disappearing from the current timeline, presumably to be trapped in the Speedforce as well, will Barry be able to maintain the same voice of reason as before? Or will it become a question of which family to save? 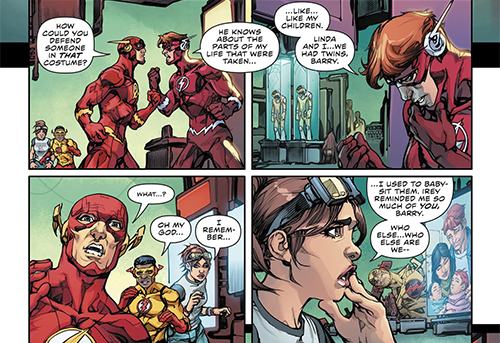 The race between Barry and Wally begins just as The Flash #48 ends, but the issue has already given readers quite a lot to chew on. At this point there’s no way of knowing how things will turn out, but Williamson has done an excellent job of crafting a story that feels both suspenseful and perfectly in character, while Porter and Hi-Fi have pulled out all the stops to make Speedforce battles and time displacement look as epic and large-scale as they deserve to be.

Verdict: 4.5 out 5 stars. Flash War is off to the races, meshing heart-wrenching emotional beats with heart-stopping action and making sure neither aspect feels out of place. After the arc with Grodd, which required some suspension of disbelief to accept Barry acting a certain way, it’s good to see The Flash #48 returning the book back to top form.