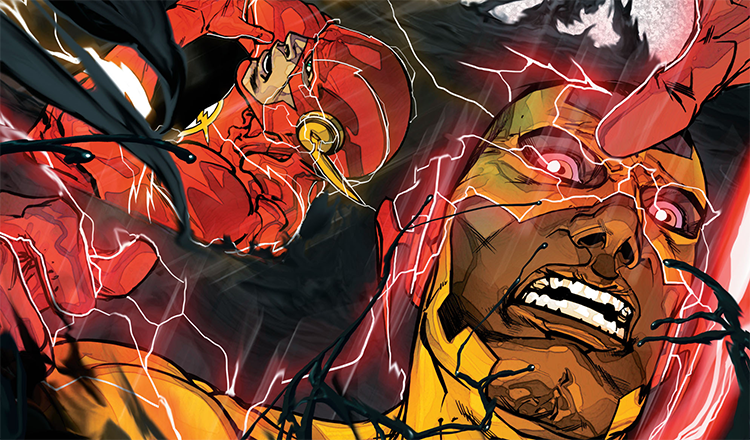 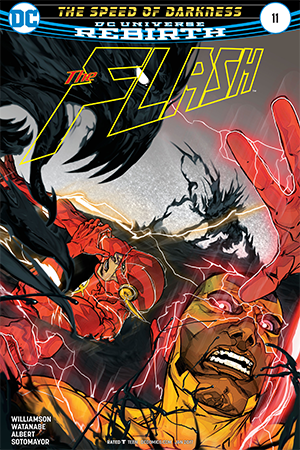 The Flash delivered one of its best issues this week, giving readers an in-depth look at The Shade and further exploring the dynamic between Barry and the West family. Even though Wally is out of commission for most of it, there is a good deal of focus on what Barry and The Flash separately mean to him. Iris, for her part, also shows how differently she treats the two men when it comes to her nephew.

The Shade is introduced here as a very complex character , even without bringing in his backstory from Starman or his own mini-series. In a way, his dilemma reflects Barry’s own. Though Shade has lost control of his shadows, he is still responsible for their actions because they spring from his own self-doubt and desires. Flash isn’t a dark manifestation at all, but Barry still affects the world and the people he loves through that persona and then still has to deal with the consequences as Barry Allen. 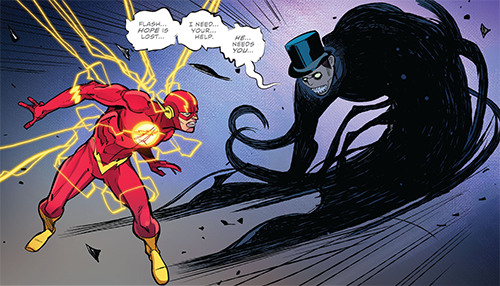 As much as Shade needs Barry’s optimism right now, he also feels like exactly the kind of ally Barry needs – especially a Barry who is still slowly learning about an entirely different life thanks to the events of Rebirth. Of course, it’s not just Barry who has once experienced the loss of hope that Shade spoke of, and Wally gets a chance to share his struggles near the end. Overall, his appearance brings a great supernatural element to The Flash will also serving as character development for the protagonists.

The Shadowlands set up a fun conflict between Iris and the Flash that I can’t wait to read about next month, but there was also a lot of interesting build-up and tension throughout the issue. Iris respects Barry as an authority figure in Wally’s life while simultaneously feeling it’s wrong for the Flash to act in that capacity towards Kid Flash – precisely because she doesn’t know they’re one and the same. This led to a great comedic beat between Iris and Barry, in which she manages to wound his pride because she has no idea who she’s really talking to. While the issue developed Iris and Barry’s friendship further, it also delved into the rift between Iris and the Flash… Which means Flash might have to make some changes if he wants Barry’s relationships with both Iris and Wally to thrive. 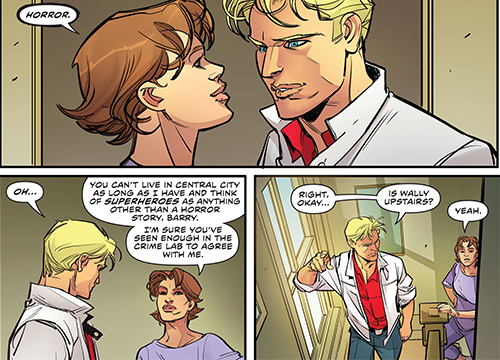 Joshua Williamson has truly captured the essence of Barry Allen’s innate goodness, and it’s clearly showcased both in his care for the Wests as well as his desire to reach out to Shade. The light tone of the first half of this week’s issue is perfectly complimented by Davide Gianfelice and Ivan Plascencia’s artwork. The colors are bright and airy at first, turning darker and gloomier once the characters enter the Shadowlands. But even in the presence of darkness, Flash and Kid Flash can push back with their lightning and make the panels glow.

Regardless of who is drawing which issue, this run of The Flash has consistently felt kinetic. The lightning almost moves off the page, creating the feeling that Barry – and now Wally, too – is constantly in motion. Meanwhile, this issue in particular managed to deftly weave between different moods and locations with ease in thanks to the art team. The flashbacks to Shade’s life with the aptly-named Hope take on the dreamlike, pastel quality that starkly contrasts the sombre purple palette of the Shadowlands, but the shifts never feel abrupt. Nor do the bursts of lightning feel out of place even when Barry and Wally are standing still; rather, they are the physical manifestation of just why Shade called for their help in the first place. 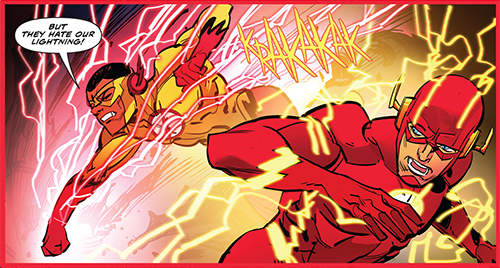 Verdict: 5 out 5 stars. Honestly this issue was so much fun from top to bottom. Getting to see the dynamic between Iris and Barry and well as Barry and Wally was quite a treat, and Shade is as entertaining an anti-hero (or anti-villain?) as ever. The conclusion to this arc promises to be exciting, and will hopefully open the door to more secrets being revealed.