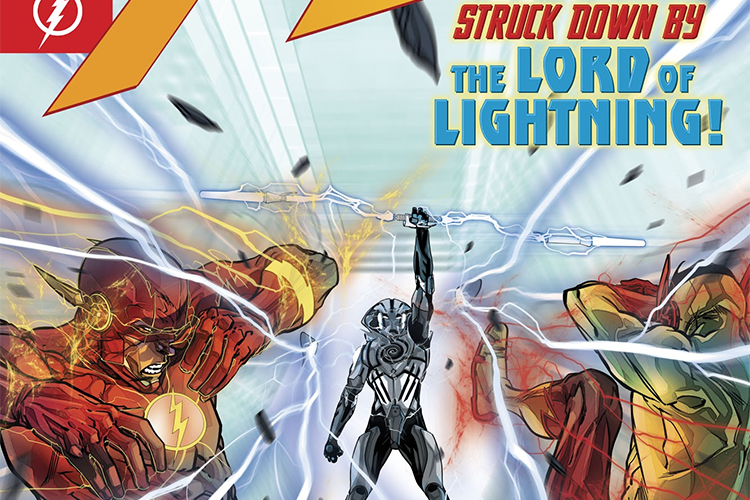 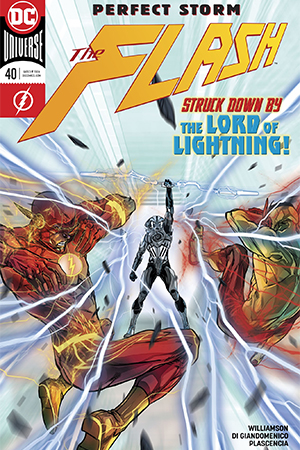 The Flash #40 ushers in a (temporary?) new status quo that seems designed to lead into Flash War later this year, but first it takes Barry Allen’s fears and insecurities apart and sticks them under a microscope. In a way, it’s the perfect companion to the recent Flash Annual, examining Barry much like that issue examined Wally West. And what better villain to use for such a than psychic gorilla Grodd, who loves nothing more than to throw Barry’s secrets back in his face?

As it turns out, Grodd is in desperate need of the Speed Force because he is dying and thinks that some of the sweet electric juice will save him. From the start, his motivations are clearly fleshed out and his ability to reach into Barry’s mind and twist his thoughts is in full display. This is a direct contrast to Grodd’s underlings, Raijin and Meena, who have been murky at best throughout the arc. Raijin gives his spiel about being a lowly STAR Labs scientist offered the temptations of the Speed Force as a reason to follow Grodd, but he may as well just be a mind-controlled minion with no backstory. And perhaps that’s the point? No matter how free the ‘Lord of Lightning’ thinks he is, he’s only following Grodd’s will rather than his own.

As flimsy a villain as Raijin is, it’s fitting that he’s easily taken out by a tag team of the Flash’s much more well-fleshed out associates, Kid Flash and Avery Ho, in a fun and dynamic sequence mines the most out of Carmine Di Giandomenico’s artwork. Even without the Speed Force flashing all around Avery, her flips to grab Raijin’s weapon after Wally punches him out capture the essence of what makes The Flash #40 so kinetic.

Once Barry sends his sidekicks away, presumably for their own benefit, that’s when The Flash #40 starts digging deep. Grodd attacks Barry’s many perceived failures, most significantly his mother’s murder and father’s imprisonment, and juxtaposes them against all the apparent benefits the Speed Force has bestowed upon them. Two full-spread pages starkly contrast Barry’s life with and without speed, and it would certainly be easy for anyone to fall prey to Grodd’s insidious notion that he is nothing without it.

Williamson lays out Barry’s yearning for a family and a place to belong beautifully, with Plascencia and Di Giandomenico giving life to that heartbreak in a swirl of lightning and colors. Everything from his Justice League membership to his relationship with Iris gets used as a psychological weapon against him until the time is ripe for Meena to extract the Speed Force and pass it along to Grodd. I’m not even going to pretend I understood how that happened or why Meena is even interested in Grodd’s health, but Barry’s anguish is evident on the page and the art is spectacular to look at. Even Wands gets to play around with the different crackles and booms that presumably go along with a sentient gorilla stealing speed from the Flash. 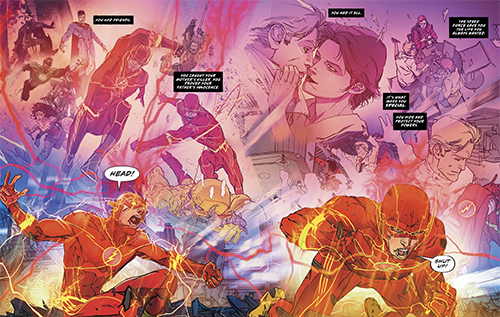 Seeing Barry stripped of his powers (and even partially his suit!) is a sorry sight indeed, and the story and art are both perfectly in sync to make it one of the more poignant moments in the run. But the most important moment occurs when the older Wally West saves his mentor from a fall that would otherwise kill him – and, as a bonus, Barry saying he loves Iris as he falls made my week. Mustering up all that optimism and cheer that he’s known for, Barry chooses not to wallow as he did during the Negative Flash arc and instead names Wally the new Flash of Central City.

It’s about time that Wally be allowed to take part in The Flash series proper, but hopefully it doesn’t have to end up being a There Can Only Be One situation as Flash War would have us believe. One of the most iconic things about DC’s speedsters is that they’re a family, and family is exactly what Barry and Wally have always wanted, so it would be a shame for either of them to disappear when they’re only just starting to rebuild theirs.

Verdict: 4 out 5 stars. A great companion to the annual from a few weeks back, The Flash #40 succeeds in utilizing Grodd and paving the way for Wally’s more permanent return despite suffering from a few mediocre secondary villains.