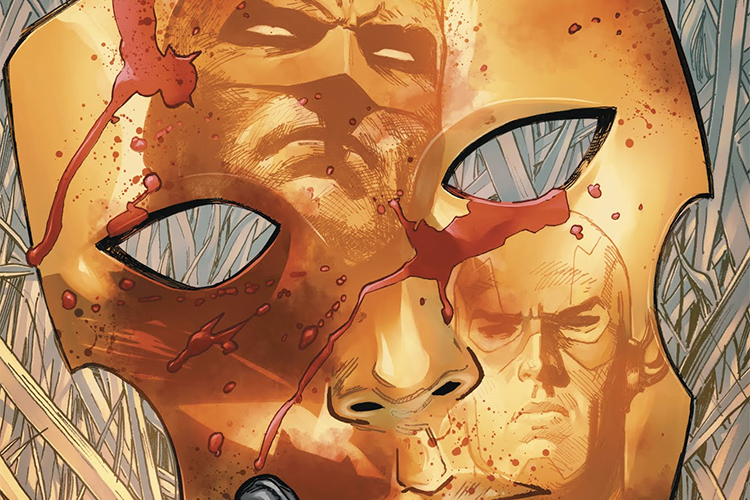 Heroes in Crisis packs a powerful punch in this set of issues thanks to some well-placed flashbacks of Booster Gold’s first day at Sanctuary and Wally West’s last. From the start of issue #3, it’s clear that we’re in for an emotional ride – one with more answers and more nuance than the last two months have provided.

While Wally was remembering his life with Linda in the kids – a life that no longer exists thanks to Flashpoint and Rebirth – Booster Gold was being introduced to the ins and outs of Sanctuary, complete with creepy Psycho Pirate looking masks meant to preserve anonymity. Of course, it’s that very anonymity which spells doom and confusion when the tragedy occurs later on down the line.

It turns out that the visions Wally is seeing come from a Kryptonian chamber that becomes what they needed it to be, which Lagoon Boy also makes use of when relives the experience of getting hit by a laser again and again. But Booster Gold’s choice is the most surprising yet obvious of all.

Yes, Heroes in Crisis #3 gives us Booster Gold talking to himself, because how else would a man like that peel his own layers? Unfortunately, we once again don’t get too much of the conversation in favor of more punching. But all three flashbacks come to a screeching halt anyway because of an emergency. We witness Lagoon Boy coming upon the horrifying scene before he himself is killed, followed closely by Roy and Wally, and while it is gut-wrenching it at least exonerates Booster Gold.

Harley, however, still very much looks like a culprit. But given how the issue ends with a final roll call that includes Poison Ivy, there’s no way that can be the case. Speaking of that roll call, the art from Clay Mann, Lee Weeks and Tomeu Morley was once more at its best when juxtaposing the calm center of the confessionals with the barely contained rage and pain of its confidants.

Heroes in Crisis #4 jumps around more than the previous three combined, from the Titans and their grief process to the Justice League’s investigation and interrogation to Lois’ journalist ethics being at odds with her feelings as a wife. But the most powerful sequence in the middle of the jumble is between Batgirl and Harley. buy bimatoprost online https://bethanyhealthcare.org/wp-content/languages/new/bimatoprost.html no prescription

Since they are both women who have been scarred by the Joker, Barbara is in a unique position to reach out to Harley and get through to her. While it was still unclear – to me at least – how responsible Harley was for the Sanctuary deaths, Barbara’s calm handling of her was enough to bring tears to my eyes. In a way, it’s kind of paralleled by the bromance between Blue Beetle and Booster Gold. But the latter, with one friend breaking another out before answers could be achieved, feels more like a way to prolong the plot than a real exploration of two men’s feelings.

Heroes in Crisis #4 ends with the fulfillment of the promise made in #2: the secret of the Sanctuary and the exposure of private confessionals starring various heroes. We have no idea where the story will go from here, but as Harley said, “&$@@ the world. It needs changing.”

Verdict: 3.5 out 5 stars. While suffering from a bit too many hanging plot threads, Heroes in Crisis #3 and #4 continues to explore the difficulties of life as a hero and gives several characters their moment to shine.