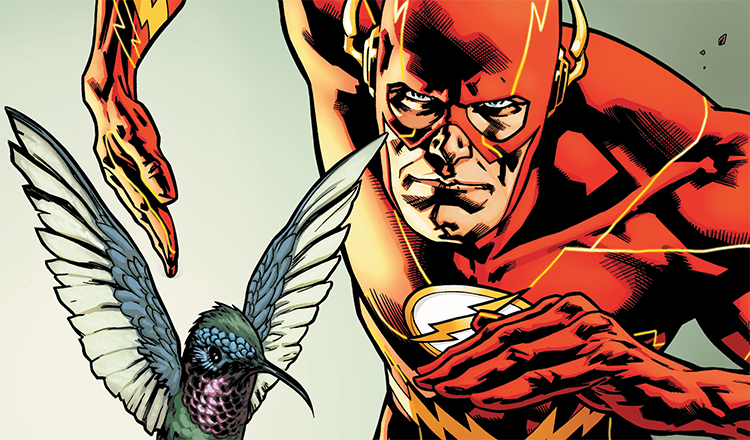 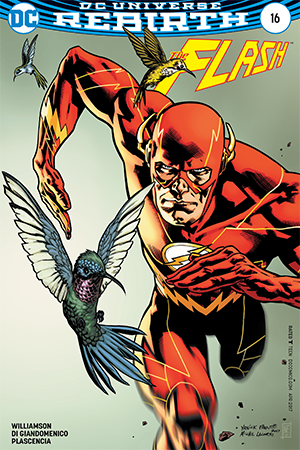 As The Flash #16 opens, Barry is wracked by guilt for not having seen through the Rogues’ ruse in time to stop Central City from burning. Thankfully no one was injured in the Heatwave’s attacks, but Barry still beats himself up over taking tardiness to a new level. The glimpses we get of the city look as desolate as the Flash feels, but at least Iris West is on the scene to build his confidence back up in her search for a more hopeful headline – all without knowing the Flash is really Barry.

Armed with the new notion to “think like a Rogue,” the Flash begins his hunt to learn what the Rogues stole in order to better understand their plan. It’s an excellent reminder than Barry Allen is a detective in some ways too, just like Bruce Wayne. As a police scientist, he has to deal with facts and extrapolate conclusions from them – so it’s always a treat when his alter ego requires him to engage in similar reasoning.

Barry’s search culminates in a very illuminating conversation with Heatwave, and of course in a fiery battle that would be enough of a cliffhanger for any good issue of The Flash. But Joshua Williamson goes beyond that first fight with Heatwave, pulling back the curtain on how the Rogues operate and on just how clever the Flash has to be to get ahead of them.

Barry displays his intelligence this issue without the story needing to dumb down the Rogues so he can win, which is excellent in and of itself. However, it’s even better than The Flash explores Barry’s view of the Rogues versus their view of themselves in depth. Over and over again, Barry tries to connect with them on a human level because he wants to believe there is goodness in them and that all the chances he’s given them have not gone to waste. And while they keep shooting back how despicable at every turn, he remains right in essentials. The Rogues are bonded by love of their family – it’s just that they are each other’s family instead of anyone else’s. The Flash has always held family at its center – whether it was Barry, Iris and Wally or Wally, Linda and their twins – so it’s no surprise that this theme extends to the villains as well.

This brings us to Captain Cold, the head of the Rogues little family and potentially The Flash‘s most famous villain. Leonard Snart emerges on the scene with a great of genius and paranoia, which ends up being well-warranted by the end of the issue. There is an undercurrent in his speeches that suggest the possibility that as much as he may antagonize him, Captain Cold doesn’t want to be rid of the Flash. His disbelief when Heatwave claims to have defeated them can be read as despair as well, but the story doesn’t delve into that as much. Instead, the final pages of the issue build up to a climactic battle between the Flash and Captain Cold.

Carmine Di Giandomenico once again proves how integral he’s become to the current run, with fast and fluid lines that not only emphasize Barry’s speed but also show the Rogues in the best possible light. Perhaps it’s because Barry was the Flash the entire issue, but there wasn’t a single panel that felt out of place. Ivan Plascencia’s colors continue to hold the world together, and the blues and yellows blend together effectively throughout. The color palette seems to serve as a metaphor for the ensuing fight between speed and cold. 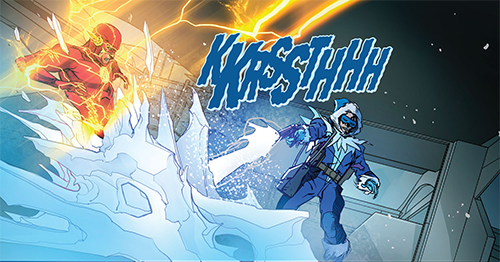 Verdict: 4 out 5 stars. While the first two parts of the arc were a little slow to get started, The Flash more than makes up for it this week. A fun and fresh take of the Rogues as well as an insightful exploration of Barry’s thought process makes for a great read.