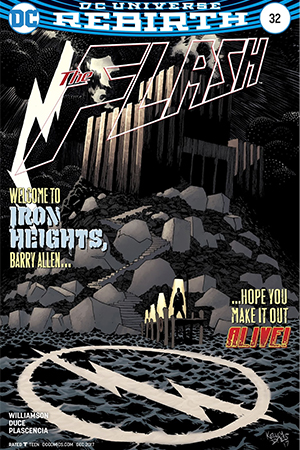 After the fallout from the last issue, The Flash #32 picks up with Barry Allen headed to Iron Heights as part of his new position/punishment in the CCPD crime lab. And of course his actions have dragged poor Kristen along with him, a situation she’s none too happy about. They have their work cut out for them, given that the new boss Warden Wolfe seems to simultaneously hate the Flash while also not caring very much at all for the well-being of the inmates. Inmates that, did I mention, include most of the Rogues and Godspeed? The groundwork for some pretty spectacular showdowns is definitely here.

Meanwhile, Barry is working on controlling his Negative Speed Force powers with the help of Kid Flash, and it’s wonderful to see their partnership at work once more. Unfortunately, his previous lies and current estrangement from Iris make a relationship with the actual person Wally West a little harder to manage. And given who Barry runs into at the very end of the issue, it loos like his personal life will be up in the air for a little while longer. 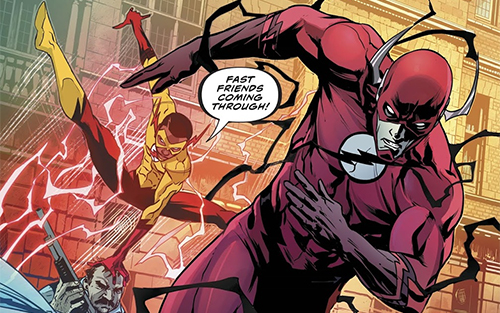 The first, most obvious thing to say about The Flash #32 is that it looks different. Duce did some good work on #29, but this is his first time taking over the pencil work in a Flash issue and at first glance it took me out of the story. Not because there was anything wrong with it – in fact he has quite a talent for detailing the emotion on characters’ faces and making them look both realistic and appealing – but merely because it was a change of pace. However, Ivan Plascencia on colors and Steve Wands helming the lettering keep the book from fitting right in with the rest of the run overall.

Speaking of the colors, the first half is especially fun to look at due to the visual differences between Wally’s powers and Barry’s. The Negative side of the Speed Force has been hard for Flash himself to get a handle on, but it was also pretty nebulous as a reader. Having Kid Flash alongside him really highlights the stark contrast, at once making me long for a return to the status quo while also making the new powers easier to stomach. 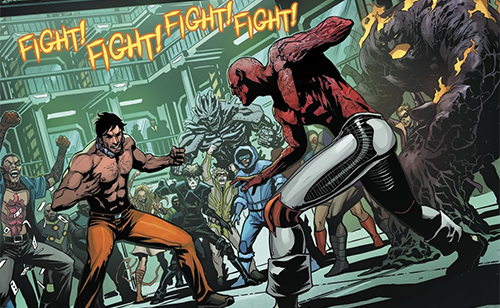 While The Flash #32 is much more of an establishing issue – a few pages are spent recapping Wally’s adventures on Teen Titans and Deathstroke while several more set the scene for Barry’s new job – there is a great deal of action to be had. One of the big selling points is the fight sequence between August Heart and Heatwave, and it starts off fun and bloody but quickly leads to a better view of the harsh and brutal conditions of Iron Heights. Given the current American climate when it comes to things like police brutality and treatment of prisoners, this kind of a storyline is rather timely. If anything, the most disheartening part about it is hearing Barry Allen of all people agree with Warden Wolfe’s methods – hopefully that’s something that will be explored and resolved as he gets a handle on his darker powers and personality.

This issue introduces Black Spider and Copperhead into the story, and while we don’t yet know what higher purpose they are serving, they are intriguing enough for now. Of course, the splash page is the one that raises the most questions… Ones which will have to wait until after the Metal tie-in to finally return to the Black Hole storyline that took shape in #20. I just hope that Iris will get to be a part of it like she was then, since she’s taken quite a backseat since killing Reverse Flash and breaking up with Barry.

Given that he once again brings up her killing Eobard – though does anyone honestly think he’s dead? – that seems like something the two of them should talk about. Which reminds me that his last girlfriend was shown alive and working with Black Hole a few months back, so we shall soon see how that plays into the next arc. Do they want to test Barry’s new powers or are they plotting something even bigger?

Verdict: 3 out 5 stars. It’s a lot of fun to see Barry and Wally together again, as strained as things may be between them – but The Flash #32 is definitely more of a set-up issue than anything. There’s a lot of interesting material to mine in the next few months, and I look forward to Williamson touching on all of them in one way or another.