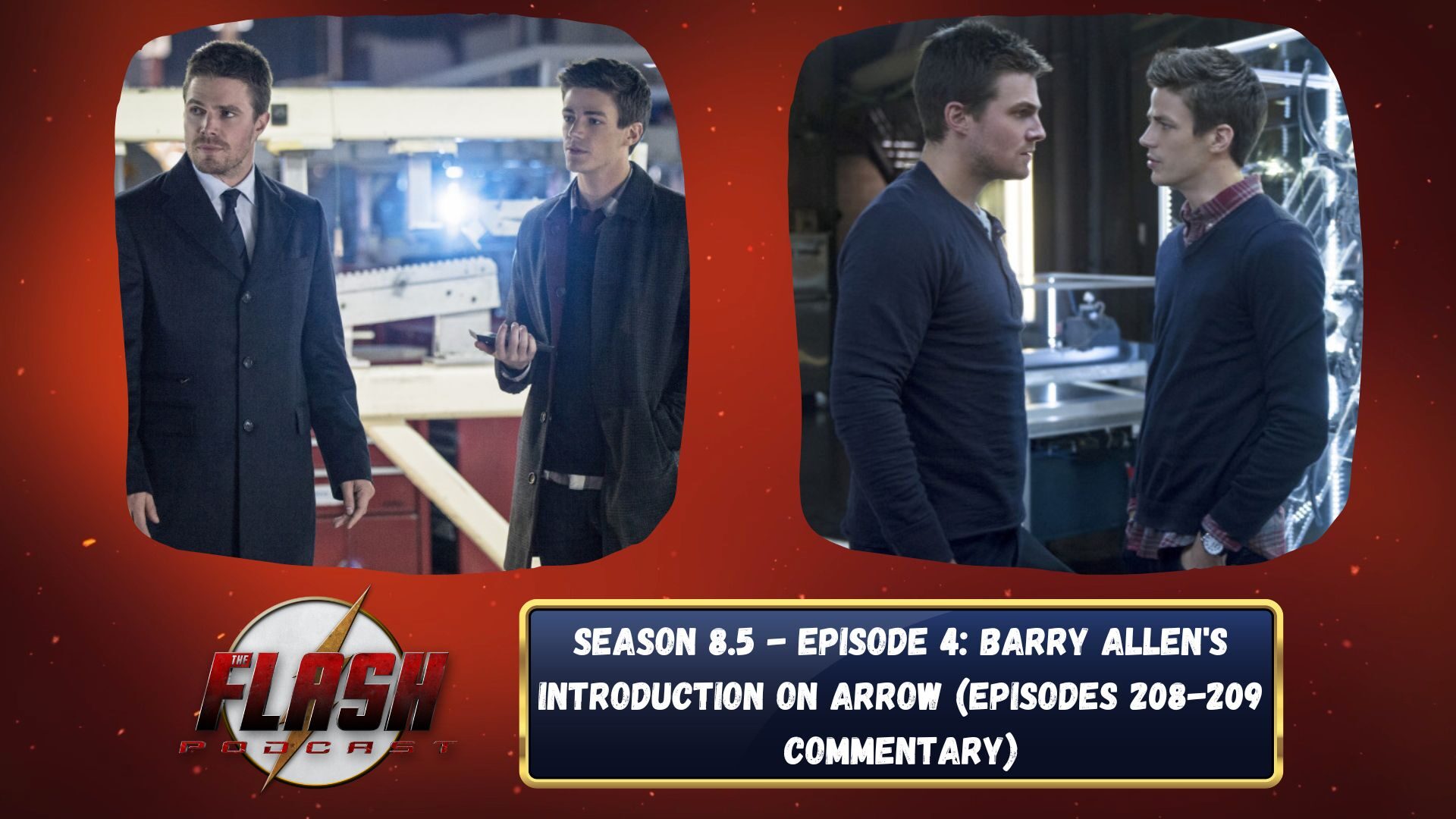 On this week’s episode of The Flash Podcast,  Andy, Tatiana, Breeze, and Lacy get together to revisit Barry Allen’s introduction in the Arrowverse that set up The Flash. Before becoming the fastest man alive, Barry had his two-episode arc on Arrow, that set up his iconic journey as one of the Arrowverse’s greatest superheroes. Join the gang as they do episode commentaries on Arrow season 2, episodes 8 and 9, “The Scientist” and “Three Ghosts” respectively! That and more on this week’s episode of The Flash Podcast!

“The Scientist” – (8:00-9:00 p.m. ET) (TV-14, V) (HDTV) BARRY ALLEN COMES TO STARLING CITY – A seemingly impossible robbery at Queen Consolidated’s Applied Sciences Division brings Central City police scientist Barry Allen (guest star Grant Gustin) to town. Citing a similar case back home, Barry offers to help Oliver (Stephen Amell) and team with the investigation. Oliver senses there is more to Barry than meets the eye, but he’s distracted by the similarities between this current case and something that happened on the island. Meanwhile, Felicity (Emily Bett Rickards) takes a liking to Barry, which doesn’t go unnoticed by Oliver. Sin (guest star Bex Taylor-Klaus) asks Roy (Colton Haynes) for help when a friend of hers goes missing. Roy is surprised when Thea (Willa Holland) not only encourages him to help, but joins the search. Unfortunately, Sin’s friend is connected to Brother Blood (guest star Kevin Alejandro), and their search ultimately gets one of them seriously injured. Michael Schultz directed the episode with story by Greg Berlanti & Andrew Kresiberg and teleplay by Andrew Kreisberg & Geoff Johns (#208).

“Three Ghosts” – (8:00-9:00 p.m. ET) (Content Rating TBD) (HDTV) OLIVER IS VISITED BY GHOSTS FROM THE PAST – After a fight with Cyrus Gold AKA the Acolyte (guest star Graham Shiels), Oliver (Stephen Amell) is drugged and left for dead. Determined to cure him, Felicity (Emily Bett Rickards) makes a risky decision. The cure causes Oliver to hallucinate, and what he sees forces him to confront his past. Meanwhile, Barry (guest star Grant Gustin) continues to help Felicity, and their connection grows stronger. The Arrow asks Lance (Paul Blackthorne) to look into Gold, but when the stakeout on Gold goes bad, someone is killed. Roy (Colton Haynes) is captured and tortured by Brother Blood (guest star Kevin Alejandro). John Behring directed the episode with story by Greg Berlanti & Andrew Kresiberg and teleplay by Geoff Johns & Ben Sokolowski (#209).

SPECIAL MESSAGE: As we are heading into the show’s final season, season 8.5 will be focused heavily on talking about what we hope to see in The Flash season 9. So be ready to expect multiple individual episodes throughout Season 8.5. where we talk about what we hope to see for all the characters, speculations, and lots more. Last, but certainly not the least: we will be going all-in for The Flash Podcast Season 9, with attempts to get more interviews, opportunities, and content for all of you wonderful listeners. So more than ever, subscribe to the podcast through the links below and follow us through our social media links below, as every engagement matters and will help to make everyone’s season 9 experience as iconic as possible!